“Freedom is life’s great lie. Once you accept that, in your heart… You will know peace.” – Loki (channeling Mayor Bloomberg)

I don’t think that I am revealing any great secret when I say that I am a huge fan of comic books in general and Marvel in particular.  Having said that, it should come as no surprise that I have watched the Avengers movie many times since the first midnight showing which I attended with my oldest son.

One of the things I enjoy most about good sci-fi and fantasy movies is the fact that they allow you to suspend reality for a few hours and just enjoy the story.  But on my last viewing, a little bit of reality managed to slip in and I found myself chuckling as I watched Hawkeye kill an alien by stabbing it with a loose arrow.

Rather surprisingly, it turns out that the alien infantry, while numerous and well armed, were completely unarmored as were their vehicles.  A single well-placed 9mm round from Black Widow’s sidearm or even Hawkeye’s hand-driven arrow were all sufficient to incapacitate the alien soldiers or bring down a speeder.

And that’s when it suddenly struck me.  In New York, such an invasion would be terrifying because the disarmed populace wouldn’t even have so much as a 32 ounce soda to throw at the aliens.  But in Virginia or the rest of free-America, aggressive, unarmored aliens on flying scooters pouring through a hole in the sky would be viewed as a free game of galactic skeet with flying scooters as prizes.

I am rather embarrassed to admit that as this thought crossed my mind, I committed an extremely impolite act and literally laughed out loud in the theatre.

Now I know what you are going to say next.  You are going to point out that the large armored creatures which accompanied the aliens were not so unprotected.  In fact, I suspect that you will point out Iron Man’s inability to cut through the armor plating on one creature’s side that forced him to resort to an attack on the unarmored mouth and points beyond. 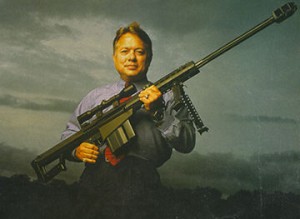 I have only one thing to say in response … Thank God for Ronnie Barrett and the M82A1!

Travelling at over 2,600 feet per second and packing almost 10,000 ft-lbs of force at a rangle of 100 yards, the 50 BMG cartridge would give one of the big alien creatures a seriously bad day.

I can see it now, all across America as the large aliens fell, you would hear gun owners turning to their respective spouses and saying “See!  I told you it would come in handy some day.”

But enough of that.  If you haven’t watched The Avengers yet, then go see the movie.  If you have seen it, go see it again.  It is an astonishing film with great special effects and truly believable characters for which Joss Whedon deserves a great deal of credit.

But as you are watching Black Widow use her two-gun mojo, just remember that there are real women who you would much rather have stand by your side when the aliens come calling.

Until next time true believers …

In addition, his open carry advocacy has been featured on Nightline and The Daily Show With Jon Stewart.
View all posts by John Pierce →
This entry was posted in Media Views on The Second Amendment, Popular Culture, State Laws. Bookmark the permalink.