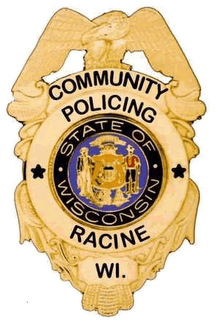 I imagine that we all have seen a movie or television show where the bad guy is being led away in handcuffs while loudly proclaiming to anyone who will listen; “I was framed!” In most cases, this scene is presented to provide a sense of closure and slight comedic relief. We know the acts of the bad guy were his own and we recognize his pleas as what they are; a last desperate attempt to avoid responsibility for his actions.

But can law enforcement themselves be entrapped? That seems to be the extraordinary claim of the Racine, Wisconsin police department in the case of an open carrier who was arrested for obstructing justice after he apparently refused to identify himself when officers began questioning him for open carrying on the porch of his own home.

The facts are still emerging, but reports seem to agree that officers were in the neighborhood where Frank Rock lives on Wednesday night investigating the shooting of one or more raccoons. While in the neighborhood, officers noticed that Rock, sitting peacefully on his front porch, was openly wearing a holstered handgun, which is legal in Wisconsin, and began questioning him. When Rock refused to identify himself or answer their questions, officers arrested him, charging him under Wisconsin statute 946.41(1) which reads:

Whoever knowingly resists or obstructs an officer while such officer is doing any act in an official capacity and with lawful authority, is guilty of a Class A misdemeanor.

The issue then becomes a twofold inquiry. First we must ask whether the officers were acting under “lawful authority” when they questioned Rock about his legal activity on his own property and secondly, whether his refusal to answer their questions rises to the level of resistance or obstruction required by the statute.

Luckily, we have clear legislative and judicial guidance on both issues. On the first issue, the Supreme Court held in Terry v. Ohio that investigative stops are justified (and therefore lawful authority) only when the officer has reasonable and articulable suspicion that a crime is being or will be committed. In the December 2005 issue of Police Chiefs Magazine, this specific topic was covered by Massachusetts attorney John M. Collins in an article entitled “Responding to Gun Possession Reports.” In his article he makes two things very clear. First, he states that “Where simply carrying a handgun is not in itself illegal and does not constitute probable cause to arrest, it follows that carrying a handgun, in and of itself, does not furnish reasonable suspicion justifying a Terry stop.” He follows this by giving officers options on how to proceed in such an event, starting with seeking voluntary compliance by the citizen. However, he notes that “If the person … refuses to answer, and the officer does not otherwise have (legally sufficient) reasonable suspicion of criminal activity, the officer must allow the person to continue on his or her way.”

Uh Oh … It appears that the Racine Police Department has a problem already doesn’t it? But we should not consider this analysis dispositive. So let’s move on to the second issue of whether Rock’s refusal to answer the officer’s question was sufficient to constitute resistance or obstruction.

Under Wisconsin statute 968.24, which effectively codifies the United States Supreme Court ruling in Terry, an officer, “after having identified himself or herself as a law enforcement officer, may stop a person in a public place for a reasonable period of time when the officer reasonably suspects that such person is committing, is about to commit or has committed a crime, and may demand the name and address of the person and an explanation of the person’s conduct.”

However, this statute does not extend so far as to impose a penalty for failure to respond to such a demand. Such a penalty was the subject of a 2004 Supreme Court refinement of Terry in the case of Hiibel v Nevada and the penalty was held to be constitutional, however Hiibel is irrelevant in this case because Wisconsin has enacted no such penalty. In fact, in the July-August 2004 newsletter of the Wisconsin Chiefs of Police Association, this very topic was discussed and Wisconsin officers were cautioned to “Beware of misplaced reliance on Hiibel” because “a person may only be arrested for refusing to identify himself if some statute or ordinance makes it unlawful to so refuse under the circumstances” and Wisconsin has no such statute or ordinance.

As a matter of fact, the Wisconsin Supreme Court has ruled on this very issue in the case of Henes v. Morrissey and held that “No law allows officers to arrest for obstruction on a person’s refusal to give his or her name. Mere silence is insufficient to constitute obstruction.”

Wow … It sure seems that the officers overstepped their bounds in this case. And it appears that they know it; because their first reaction when questioned was to claim that it appears they were “set up … to see how they would react to open carry.”

Are they actually claiming that they were entrapped into making an improper arrest? That is an astonishing claim and one that seems to have little purpose other than possibly setting the stage for a defense should Mr. Rock pursue civil rights claims under 42 U.S.C. § 1983 for false arrest.

As both an open carry advocate and a supporter of the very difficult job done by our nation’s law enforcement officers, I do not take pleasure in seeing such a lawsuit filed. It means that we have not yet accomplished our primary goal of educating both citizens and law enforcement about the legality of open carry so that law abiding citizens who choose to exercise their rights may do so without fear of these types of encounters.

However, I am not the one who spent 9 hours of his life bereft of liberty and being treated like a common criminal. If Mr. Rock decides to pursue such a course of action, I think he has a very compelling legal story to present to the court. And with the recent release of the memo by Wisconsin Attorney General Van Hollen noting that open carry is legal in Wisconsin, coupled with the clear notification in multiple law enforcement publications and Wisconsin Supreme Court rulings, it seems doubtful that the officers would pass the reasonableness test necessary to enjoy qualified immunity.

It is a sad state of affairs for all concerned. But what it does not appear to have been is a setup.

In addition, his open carry advocacy has been featured on Nightline and The Daily Show With Jon Stewart.
View all posts by John Pierce →
This entry was posted in Open Carry, Stop and ID Statutes. Bookmark the permalink.