The road to Damascus 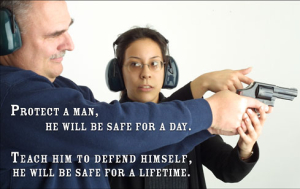 Where gun rights are concerned, a “Road to Damascus” moment occurs when a formerly anti-gun or gun-shy person decides to become a gun owner.

For some, this comes after careful consideration of the issue. For others, it comes after a traumatic event illustrates to them just how critical self-defense is to a law-abiding citizen. In either case, being able to help such a new gun owner is one of the most rewarding things that an instructor gets to do.

I was lucky enough to spend most of my free time last week introducing a once gun-shy family to their rights and responsibilities as new gun owners.

It all started about three weeks ago on a Sunday afternoon. I was taking my family on a drive when my cell phone rang. The caller ID said “Randy”. When I saw who it was, my blood ran cold. It was the owner of a Pennsylvania company where I do software development and a call on the weekend could only mean one thing … “server down!”

Literally snatching up the phone, I answered it with fear in my heart. The serious tone of his voice did nothing to reassure me and I slowed my vehicle and pulled to the side of the road in anticipation of making a u-turn and heading for my home office at flank speed.

But the tale he had to tell had nothing to do with servers. He was calling because he was extremely concerned about his family’s security and had decided it was time he became a gun owner. This was a huge surprise. After all, while he had never been what you would call anti-gun, he had always declined my offers to take him shooting and had stated emphatically on more than one occasion that he did not need a gun for protection or want one in the house.

But a sobering dose of reality had changed his viewpoint. As he talked, a picture emerged. His affluent neighborhood, in the rural suburbs north of Philly, was seemingly under attack. Within a week, there had been three criminal incidents in sight of his home, which sits at the end of a long cul-de-sac and backs up to woodland.

In one incident, four thieves were apprehended late at night as they methodically broke into the cars parked along the road. In another, an unoccupied home was burglarized. However, the event that had truly frightened him was an attempted burglary of one of his neighbors in which a female accomplice brazenly walked up to the front door and knocked while her accomplices systematically checked the doors and windows along the rear of the house for any unsecured access. The homeowner was not home, but it was all captured by the security cameras he had recently installed.

In speaking with his neighbors, Randy was utterly astonished to find that he was practically the only homeowner in the entire neighborhood who did not possess a firearm for self defense. He had assumed that his “guns in the home are dangerous” mindset was shared by most of his friends and neighbors. But as he quickly found out, nothing could have been further from the truth. It dawned on him then that he would be completely helpless in the face of an armed attacker and the thought chilled him to the bone.

I assured him that I would be on a flight to Pennsylvania the next Sunday and that we would get him started on the path to a lifetime of safe firearms ownership. I promised that I would instruct him on the basics of home firearm safety, assist him in selecting a suitable firearm, and take him to the range to introduce him to his new firearm and to the mechanics and etiquette of safe shooting.

His biggest concern at that point was the fact that it would be a week before I could get there. Having made the decision to take responsibility for his own safety, the thought of waiting another week seemed daunting. But being the responsible and safety conscious person that he is, he agreed to wait.

With an introduction to home firearm safety behind us, we were off to help Randy buy his first gun. I had engaged the help of my friend Brad and we were all looking at the impressive selection of firearms at Cabelas in Hamburg, Pennsylvania. After looking at a number of firearms that Brad and I had suggested he consider, Randy had decided upon the Beretta 92FS. He liked the feel of the full-sized frame and the external safety was a feature that he definitely wanted on his first firearm.

Brad and I wandered through the aisles while he completed the background check paperwork. When he joined us, he jokingly commented that he hadn’t filled out so much paperwork since he refinanced his house. He had bought into the media’s portrayal of the “easy availability” of guns. What they hadn’t mentioned was the fact that firearms are only “easily available” to those who pass a rigorous background check. As someone who had previously been concerned about the lack of a waiting period, he was now very happy indeed that he could take his firearm home with him that same afternoon.

While we waited for his background check to be completed, we went in search of a safe for his new Beretta. He wanted to be able to safely secure the pistol while keeping it instantly accessible for home defense purposes. His wife was not with us to gasp at the price-tag, he said money was no object, and I knew just what he needed.

The GunVault Biometric Safe has been on my wish list for some time. It features a guide-mold which allows you to quickly slide your hand into position in absolute darkness, can store up to 30 fingerprints, and opens in less than a second. It was perfect! 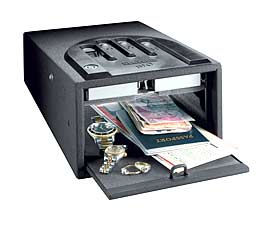 By the time he was called back to the firearms counter to complete his purchase, we had rounded out his shopping cart with ammo and cleaning supplies. He was now a gun owner!

The next night, Brad and I met Randy and his wife at the local indoor pistol range. They were both very nervous which was understandable since neither had ever fired a handgun before. But they both paid close attention as Brad and I reviewed the features and functioning of the Beretta and neither made any of the muzzle-control or handling mistakes that are common to new shooters.

As they tentatively took their turns shooting, the hand-eye coordination from years of playing tennis gave both of them a good start in shooting accurately. By the time we left the range, they were emotionally and physically drained but confident that they could use the firearm if they needed to.

I will be going back in September to take Randy shooting again. He understands that he is just beginning to understand the skills that are needed to be a safe and effective gun owner. But he has made a great start and is now a gun owner with all that entails. He understands the self-defense benefits that safely owning a firearm provides his family and he will be wary of any efforts to curtail his right to provide that security for his family.

That means that he will pay more attention to the position of politicians on gun rights when he votes, and speak out from a more pro-gun position when talking to friends and acquaintances. He will also begin to see how misleading the claims of the anti-gun movement are. In short, he will start the journey toward becoming an activist.

I have always jokingly said that my motto was “Arming America, one person at a time.” But the truth is that every new gun owner adds great strength to the fight to protect and enhance our rights.

If every gun owner would take the time to introduce just one new person to shooting, imagine what that would do to the political landscape.

In addition, his open carry advocacy has been featured on Nightline and The Daily Show With Jon Stewart.
View all posts by John Pierce →
This entry was posted in Firearms Training, New Gun Owners. Bookmark the permalink.