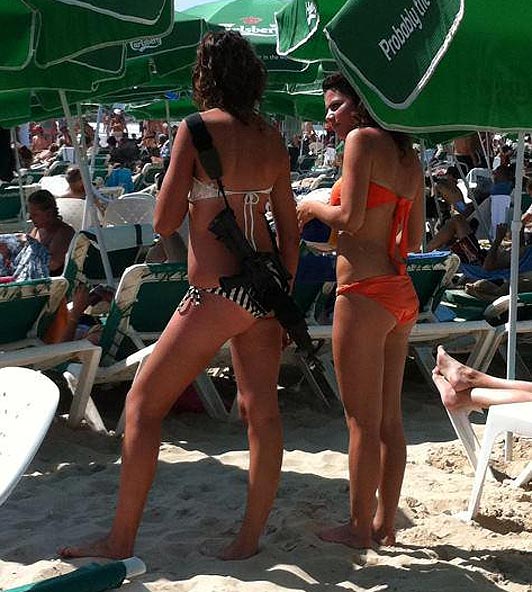 In this picture, an Israeli soldier openly carries her rifle as she enjoys the beach

Sean M. Combs is only 18 but he already knows more about civil rights and Michigan gun laws than the officers who arrested him in April for carrying an antique M1 Garand rifle slung over his shoulder.

The two officers, Rebekah Springer and Gina Potts, saw Combs carrying the rifle in Troy Michigan and demanded his ID.  When he refused, noting that he was not violating any laws, he was arrested and charged with Brandishing, Disturbing the Peace, and Obstructing an Officer.

I have written before about the misuse of these “catch-all” charges to chill the rights of citizens and this case appears no different.

I have to wonder if it wasn’t the officer’s behavior that drew the crowd.  The facts show that Combs and his girlfriend had walked around the business district for some time without drawing a crowd before officers stopped him.  And while we are wondering, do you suppose they think that “ostentatious” means “not doing what I tell him to do?”

In any case, it no longer matters because the seven person jury slapped the wrist of law enforcement today by finding him not guilty of all charges.   They stated that Combs had broken no law and they were simply upholding the law by doing so.  I am proud of the jury for doing the right thing in this case.

Perhaps Michigan law enforcement needs to retrain officers on the legality of long-gun open carry as well as when they can and cannot demand ID from a citizen absent probable cause that a crime is being committed.

Congratulations to Sean for winning his court case and a big “Thank You!” for being willing to stand up for the rights of all Michigan residents.  I wish him all the best as he now turns to his next challenge; starting college next month.

UPDATE:  I have been asked about the relevance of the picture accompanying this article.  It has nothing to do with the Combs case.  I just really like the picture!

In addition, his open carry advocacy has been featured on Nightline and The Daily Show With Jon Stewart.
View all posts by John Pierce →
This entry was posted in Abuse of Power, Long Guns, Michigan, Open Carry. Bookmark the permalink.