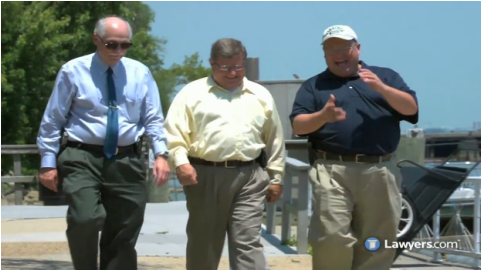 For those who are unfamiliar with the site, Lawyers.com is owned by legal services powerhouse LexisNexis.

They bill themselves as “the biggest law-oriented website on the American internet [and are focused on providing] interesting, objective, and helpful legal information to people all over the country.”

Their supervising producer contacted me early in June seeking help in putting together a story on open carry that would fit their model of short “web-only … legal-related news stories that explain the law [simply] to three-million unique visitors to Lawyers.com per month.”

After they put together a reporter and film crew, I agreed to meet them in Old Town Alexandria the weekend before Independence Day.  Virginia Citizens Defense League President Philip VanCleave and VCDL Board Member Dennis O’Connor both graciously agreed to drive up from the Richmond area to join in the shoot.

Interestingly enough, that was the weekend that the “derecho” storm struck the Mid-Atlantic region leaving millions without power.  I find it very ironic that literally as the reporter was asking the ubiquitous question about why, in a modern world, citizens still needed the right to bear arms, cell phones were not working and the Virginia 911 system was down and would remain so for another 72 hours!

We filmed all morning and into the afternoon before we were done with Old Town Alexandria.  But that was not all.  Later the next week, they drove down to my home in Bristol Virginia to film the inside shots you see in the video.  While there, I took them to Shooters Edge in Piney Flats Tennessee where they marveled at the state-of-the-art facility and filmed video of me shooting.  On that note, I would like to give a big thanks to Director of Training Mike Lewis, Range Safety Officer Javier Mata, and all the staff for going out of their way to make the shoot a rousing success.

The results of over 24 hours of combined travel and 10 hours of video?  The 2 minute 55 second video below.  We knew going in that Lawyers.com wanted a succinct summary and I think the reporter did a great job considering how dense the material is where gun laws are concerned.

However, there are a couple of quick data points I wanted to add or correct before you watch the video.

1)  While it is true that there are 28 “pure” open carry states where open carry is available without any government permission whatsoever, that is only part of the story.

2)  Open carry is available in one form or another in a whopping 43 states.

3)  There are 14 states where the legislature has made the decision that permit holders may carry openly or concealed as they see fit and this number will go up to 15 on November 1, 2012 when Oklahoma joins the ranks of licensed open carry states.

It looks like they plan on releasing a Part II to the series featuring the Brady Campaign championing the anti-Second Amendment position.  When that occurs, I will be sure to offer my commentary.

In addition, his open carry advocacy has been featured on Nightline and The Daily Show With Jon Stewart.
View all posts by John Pierce →
This entry was posted in Brady Campaign, Media Views on The Second Amendment, Open Carry, Popular Culture, Virginia. Bookmark the permalink.