Joe vs. Paul: A gun owners guide to vice presidents 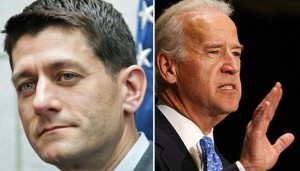 Therefore, as part of my ongoing series about the presidential race, I decided to do an evaluation of where the two vice-presidential candidates stand on gun rights issues.  I have a pretty good idea what the answer is going to be but it is vitally important that we base our views upon facts and not anecdotes.  So let us see what a little research tells us about which of the two candidates would be better suited to protect our rights if they were called upon to assume the presidency or to cast a deciding vote in the Senate.

As sitting Vice President, we will give Joe Biden the first turn …

Vice President Biden is perhaps most famously known in gun rights circles for stating that “Banning guns is an idea whose time has come.” in a November 18, 1993 interview with the Associated Press.  At the time, gun rights were under severe attack by the Clinton Administration and many Democrats in Congress.  Vice President Biden, who was then Chairman of the Senate Judiciary Committee, was only too happy to join the call for a complete end to Second Amendment rights.

But people change with time and perhaps his position on gun rights has mellowed.  Are there more recent comments we can look to?  Why yes there are.  During a presidential debate in 2007, CNN hosted a YouTube debate in which citizens posed questions in videos.  One of the videos selected was a man who asked the candidates’ position on gun control while jokingly referring to his firearm as his ‘baby.’

As seen in the video below, then presidential candidate Biden (whose comments begin at 1:10) mocked the man for calling the gun his ‘baby’, stating “I tell you what.  If that’s his baby he needs help … I don’t know that he is mentally qualified to own that gun.”

During his answer, he appeared visibly disgusted and went on to proudly remind the audience that “I’m the guy who originally wrote the assault weapons ban.”

I think we can safely assume that Vice President Biden is as much an enemy of gun rights today as he was in 1993.  The rhetoric may have changed but the genuine disdain is clear on his face.

Now that Vice President Biden’s position is well established, let’s turn to the newcomer. Congressman Ryan has served seven terms in Congress from Wisconsin where he was born and raised.  Most well known for his economic and budget proposals, Ryan has been generally felt to be pro-gun.  The New York Times went so far as to say that he “championed the rights of gun owners.” But why?  What has he done for gun owners?

This picture of Ryan as a champion of gun rights seems based upon his voting record and a C-SPAN interview he did when first elected in 1998.  In the video below, Congressman Ryan expresses doubt about the need for further gun control but seems far from what I would consider a ‘champion of gun rights.’  There must be more to the story.

His voting record is where Congressman Ryan really shines. It shows a solid dedication to the issue which is reflected in his ‘A’ rating from the National Rifle Association.  Perhaps more impressively, he also holds an ‘A’ rating from Gun Owners of America who are widely felt to be more stringent in their grading.

Some of the votes that we are talking about are:

It is clear that, from a gun rights perspective, there is no contest between the two candidates.  Vice President Biden seems to have genuine antipathy toward gun ownership whereas Congressman Ryan has stood up for gun owners at every turn.  There may be other issues on which Congressman Ryan may be criticized, but on gun rights, he is an absolute winner!

In addition, his open carry advocacy has been featured on Nightline and The Daily Show With Jon Stewart.
View all posts by John Pierce →
This entry was posted in Presidential Politics, Vice Presidents. Bookmark the permalink.

2 Responses to Joe vs. Paul: A gun owners guide to vice presidents