Election 2012: The battle of the platforms 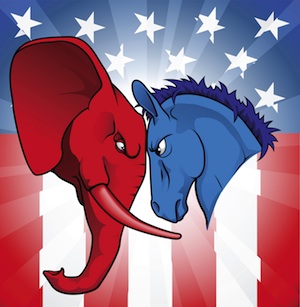 The presidential race is entering it’s final phase and the rhetoric is really heating up. With all of the political doublespeak from both candidates, it is often hard for people to decide which party would best represent their interests.

But I have been trying to cut through the rhetoric and ideology to give you the real facts about the candidates beliefs and history where gun rights are concerned.

Regular readers will know that I have written about why gun owners should fear a second term for President Obama, what a ‘President Romney’ would really mean for gun owners, and the stark differences between the gun rights views of the vice-presidential candidates.

But President and Vice-President are just two of the offices that will be up for election this November.  The two parties also have numerous House and Senate candidates who are competing for your vote and whose election will certainly impact your rights.

So let’s take a look at how the Second Amendment was treated at the GOP and DNC Conventions and in their official platforms.

We will start with the GOP Platform.  They packed so much into their platform on gun rights that the Washington Examiner called it the “most pro-gun platform ever.”  I have taken the time to emphasis those parts that I found most illustrative.

We uphold the right of individuals to keep and bear arms, a right which antedated the Constitution and was solemnly confirmed by the Second Amendment. We acknowledge, support, and defend the law-abiding citizen’s God-given right of self-defense. We call for the protection of such fundamental individual rights recognized in the Supreme Court’s decisions in District of Columbia v. Heller and McDonald v. Chicago affirming that right, and we recognize the individual responsibility to safely use and store firearms. This also includes the right to obtain and store ammunition without registration. We support the fundamental right to self-defense wherever a law-abiding citizen has a legal right to be, and we support federal legislation that would expand the exercise of that right by allowing those with state-issued carry permits to carry firearms in any state that issues such permits to its own residents. Gun ownership is responsible citizenship, enabling Americans to defend their homes and communities. We condemn frivolous lawsuits against gun manufacturers and oppose federal licensing or registration of law-abiding gun owners. We oppose legislation that is intended to restrict our Second Amendment rights by limiting the capacity of clips or magazines or otherwise restoring the ill-considered Clinton gun ban. We condemn the reckless actions associated with the operation known as “Fast and Furious,” conducted by the Department of Justice, which resulted in the murder of a U.S. Border Patrol Agent and others on both sides of the border. We applaud the Members of the U.S. House of Representatives in holding the current Administration’s Attorney General in contempt of Congress for his refusal to cooperate with their investigation into that debacle. We oppose the improper collection of firearms sales information in the four southern border states, which was imposed without congressional authority.

The GOP platform really is impressive.  Let’s break out what is included:

That is a really great platform.  But let’s not jump to conclusions just yet. What about the Democrat Platform?  As above, I have emphasized the parts I would like you to focus on.

We recognize that the individual right to bear arms is an important part of the American tradition, and we will preserve Americans’ Second Amendment right to own and use firearms. We believe that the right to own firearms is subject to reasonable regulation. We understand the terrible consequences of gun violence; it serves as a reminder that life is fragile, and our time here is limited and precious. We believe in an honest, open national conversation about firearms. We can focus on effective enforcement of existing laws, especially strengthening our background check system, and we can work together to enact commonsense improvements—like reinstating the assault weapons ban and closing the gun show loophole—so that guns do not fall into the hands of those irresponsible, law-breaking few.

There is no mention of ‘fundamental individual rights’ at all. Instead, our rights are merely “an important part of the American tradition.”  Well excuse me!  I didn’t realize that my right to keep and bear arms equates to having pumpkin pie at Thanksgiving.

They go on to say that they “will preserve Americans’ Second Amendment right to own and use firearms.” But apparently they meant to add “at least those we allow you” to the end because they go on to call for a renewal of the Clinton era ban on the most popular sporting firearms in existence today and insist on an opened-ended ability to enact “reasonable regulations.”

They also repeated the tired call for an end to private sales “so that guns do not fall into the hands of those irresponsible, law-breaking few.” When they say ‘guns’ here I can only assume they mean single-shot black powder rifles since they have indicated a willingness to snuff out most other forms of modern firearms.

Finally, you will note the complete absence of the words ‘self-defense’ in the Democrat platform. Apparently in their ideal world, a family who defended themselves from armed home invaders in the night would be immediately arrested.

In short, the 2012 Democrat Platform is a great big slap in the face for gun owners.  But I know there are Democrats who are proud supporters of gun rights. I hope they received a warm welcome in Charlotte at the DNC Convention.

Ooooh …. I guess not. Apparently gun owners are not welcome in the Democrat tent at all at risk of severe verbal attack. Some of my favorite quotes that the Daily Show reporters were able to get:

“We are the big tent party and we will let ‘most anybody in, unless of course they are carrying guns.”

“Everyone’s welcome unless you are a hunter, or a gun owner.”

As attendee after attendee is interviewed, gun ownership is attacked more than any other policy issue.  Sadly, they seemed to imply that any true Democrat could never be a gun owner.

As for independent voters who are also gun owners, the Democrats want them to know that they are welcome to vote for Democrat candidates if they can find the time between brushing their one tooth and drinking moonshine.

In addition, his open carry advocacy has been featured on Nightline and The Daily Show With Jon Stewart.
View all posts by John Pierce →
This entry was posted in 'Assault Weapons', Democrats, Gun Control, National Politics, Presidential Politics, Republicans. Bookmark the permalink.

2 Responses to Election 2012: The battle of the platforms