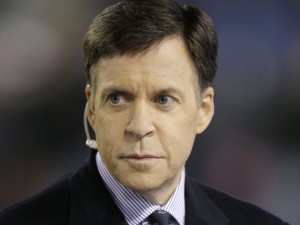 Bob Costas has largely remained silent since the uproar over his all-out attack on the Second Amendment last year.

For those not aware of the controversy, following the murder-suicide of Jovan Belcher and his girlfriend, Costas voiced his support for a complete ban on semi-auto firearms.

At the time, a number of NFL players spoke out in support of gun rights including Chief’s defensive lineman Shaun Smith: 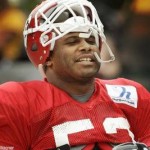 But earlier this week, Costas broke his silence when he appeared on the Daily Show with Jon Stewart. In the video, shown below, he makes several statements that I personally consider extremely racist and condescending.

“We have to acknowledge that guns are glorified in hip hop culture. Some 70% of players in the NFL are African-American, not all of them are influenced by that part of the culture, but some are. Many of these kids come out of environments where it’s commonplace for a 14 or 15-year-old to be packing.

[Football] is brutal, belligerent, and violent,. Isn’t it reasonable to expect that some of them won’t be able to contain that to the field?”

So let me get this straight Bob … according to you, African-American kids grow up around guns, grow up to become football players who are brutal and violent, and can’t control themselves from being violent off the field?  Does that about sum up your opinion of the professional athletes whose talent and hard work makes it possible for you to even have your job as a talking-head?

It sounds to me like Bob Costas has a very low opinion of both football players and African-Americans. He seems willing to treat them as second-class citizens where civil rights are concerned and to me … that is the very definition of racism.

In addition, his open carry advocacy has been featured on Nightline and The Daily Show With Jon Stewart.
View all posts by John Pierce →
This entry was posted in Celebrities, General Civil Rights, Media Views on The Second Amendment. Bookmark the permalink.