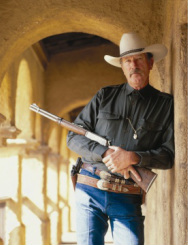 Former Texas Ranger and NRA Board Member Joaquin Jackson likes to pose with a lever action rifle.  And apparently, if he had his way, that would be practically all that you would be allowed to own.

While Jackson, who has appeared in the popular “I’m The NRA” ad campaign, likes to claim that he considers the Second Amendment to be a fundamental right, he has made comments demonstrating that he is anything but a true supporter of the gun rights of all Americans.

A leftover relic of the ‘hunters and skeet shooters only’ mentality that once prevailed at the NRA, Jackson said in a 2007 television interview that he thinks 5 rounds are all that any firearm owned by “civilians” should ever be allowed to hold.

That’s right.  There is a sitting member of the NRA Board of Directors that wants laws more infringing than those recently passed by New York!

He also stated that he does not believe that so-called ‘assault weapons’ are protected by the Second Amendment and should be reserved to military and law enforcement but he would be willing to allow you to own them if you only had 5 round magazines.

Don’t believe me? Watch the video below to hear his condescending words for yourself.

Following an intense effort to recall him from the Board as well as internal pressure from fellow board members, Jackson recently attempted to redefine what he said in that interview. After watching the video, I will let you make your own determination about whether Mr. Jackson’s words reflect the reality of the situation.

“Some misunderstandings have arisen about a news interview I participated in 5 few years ago. After watching a tape of that interview, I understand the sincere concerns of many people, including dear friends of mine. And I am pleased and eager to clear up any confusion about my long held belief in the sanctity of the Second Amendment.

In the interview, when asked about my views of “assault weapons,” I was talking about true assault weapons – fully automatic firearms. I was not speaking, in any way, about semiautomatic rifles. While the media may not understand this critical distinction, I take it very seriously. But, as a result, I understand how some people may mistakenly take my comments to mean that I support a ban on civilian ownership of semiautomatic firearms. Nothing could be further from the truth. And, unfortunately, the interview was cut short before I could fully explain my thoughts and beliefs.

In fact, I am a proud owner of such rifles, as are millions of law-abiding Americans. And many Americans also enjoy owning fully automatic firearms, after being cleared by a background check and meeting the rigorous regulations to own such firearms. And these millions of lawful gun owners have every right – and a Second Amendment right – to own them.

As a hunter, I take great pride in my marksmanship. Every hunter should practice to be skilled to take prey with a single shot, if possible. That represents ethical, humane, skilled hunting. In the interview several years ago, I spoke about this aspect of hunting and my belief that no hunter should take the field and rely upon high capacity magazines to take their prey.

But that comment should never be mistaken as support for the outright banning of any ammunition magazines. In fact, such bans have been pursued over the years by state legislatures and the United States Congress and these magazine bans have always proven to be abject failures.

Let me be very clear. As a retired Texas Ranger, during 36 years of law enforcement service, I was sworn to uphold the United States Constitution. As a longtime hunter and shooter, an NRA Board Member, and as an American – I believe the Second Amendment is a sacred right of all law-abiding Americans and, as I stated in the interview in question, I believe it is the Second Amendment that ensures all of our other rights handed down by our Founding Fathers.

I have actively opposed gun bans and ammunition and magazine bans in the past, and I will continue to actively oppose such anti-gun schemes in the future.

I appreciate my friends who have brought this misunderstanding to light, for it has provided me an opportunity to alleviate any doubts about my strong support for the NRA and our Second Amendment freedom.”

I personally do not buy his explanation for a minute.  If we allow this man to remain on the Board of Directors then we might as well nominate Michael Bloomberg.

So what do we do about it? We vote his elitist butt out of our NRA! He is up for reelection this year and ballots should be arriving even as you read this. If you are a voting member and do not receive your ballot by March 1, then call the membership department and demand a replacement.

The way that NRA elections work is this. There are 29 names on the ballot and you are entitled to vote for up to 25 candidates. Generally, if you want to get someone on the Board, you would vote only for that one person, however, here we want to insure that Jackson does not get reelected so everyone should vote for 25 candidates and make sure that he is not one of them.

The candidates this year are:

Remember that ballots must arrive at the NRA no later than April 14th and the results of the election will be announced during the NRA Annual Meeting May 3rd through the 5th in Houston Texas.

In addition, his open carry advocacy has been featured on Nightline and The Daily Show With Jon Stewart.
View all posts by John Pierce →
This entry was posted in 'Assault Weapons', High Capacity Magazines, NRA. Bookmark the permalink.