Vice President Biden doubles down on his bad advice 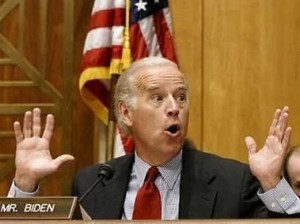 What is it with vice presidents and shotguns?  I mean, Dick Cheney may have accidentally shot someone in a display of poor firearms handling, but at least he never claimed that it was a good idea to do so.

But despite being thoroughly lambasted for last week’s illegal advice to shoot wildly into the air from one’s balcony, good ol’ Joe is back with more advice for those who are tired of living outside of prison.

In an interview with Field & Stream he made the following jaw-droppingly stupid statement.

“Well, you know, my shotgun will do better for you than your AR-15, because [if] you want to keep someone away from your house, just fire the shotgun through the door.”

Now … I know what you are thinking.

You are asking yourself whether or not you are reading a satire article from The Onion.

But amazingly enough, you are not.

A sitting vice president of the United States actually offered that advice to American citizens.

There is so much wrong with his statement that I hardly know where to begin.  But since there are those who are unfamiliar with self-defense laws and might actually take the Vice President at his word, I feel I should do a quick two-point legal analysis for you.

1)  You do not have the right to use deadly force merely to ‘keep someone away from your house’.

That is not self-defense, it is murder.

2)  Even when you otherwise might be facing a legitimate threat, you cannot fire blindly through a door without knowing who or what is on the other side.

That is not self-defense, it is reckless endangerment!

So unless you want to enjoy several years of ‘BidenCare’ wherein you receive free meals, medical care, and housing courtesy of the prison system in your state, I would suggest you ignore what Joe has to say about self-defense.

You know … many pro-gun advocates like to say that the reason anti-gun advocates are so afraid of gun ownership is because they know that they themselves would not handle the responsibility well.  Joe seems to be the living example of that hypothesis.

So where will he go from here?  What will be the next gem to fall from his lips?

I don’t know … but I do know this … I would much rather go duck hunting with Dick Cheney than ring the doorbell at Biden’s house.

In addition, his open carry advocacy has been featured on Nightline and The Daily Show With Jon Stewart.
View all posts by John Pierce →
This entry was posted in 'Assault Weapons', Gun Control, High Capacity Magazines, Vice Presidents. Bookmark the permalink.