Dispelling the myth of ‘The Wild West’ 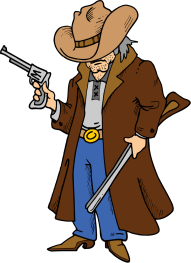 These are interesting times in the fight to protect and enhance our rights as gun owners.  In Wisconsin, we stand on the eve of an historic court ruling regarding open carry.  In Texas, South Carolina, Oklahoma and Arkansas, local activists have succeeded in making their voices heard regarding restoring open carry to these otherwise gun-friendly states.  With all of this pro-gun activity, it should come as little surprise that the anti-gun forces are out in-force repeating their aged mantra … “This isn’t the wild west.”

And this rhetoric is not limited to anti-gunners.  Recently, I was quoted in a USA Today article about the open carry initiatives around the country and in that article, Texas Senator Jeff Wentworth (R), a supposedly pro-gun legislator denounced open carry saying “I think that’s harkening too far back to the Wild West.”

With all this talk of “The Wild West”, I thought it might be informative to look at the reality of crime in the “wild west” cattle towns and compare them to the peaceful streets of such eastern, gun-control paradises as DC, New York, Baltimore and Newark.

In his book, Frontier Violence: Another Look, author W. Eugene Hollon, provides us with these astonishing facts:

Zooming forward over a century to 2007, a quick look at Uniform Crime Report statistics shows us the following regarding the aforementioned gun control “paradise” cities of the east:

It doesn’t take an advanced degree in statistics to see that a return to “wild west” levels of violent crime would be a huge improvement for the residents of these cities.

The truth of the matter is that the “wild west” wasn’t wild at all … not compared to a Saturday night in Newark.

In addition, his open carry advocacy has been featured on Nightline and The Daily Show With Jon Stewart.
View all posts by John Pierce →
This entry was posted in Media Views on The Second Amendment, Myths & Misconceptions, The 'Wild West' Myth. Bookmark the permalink.