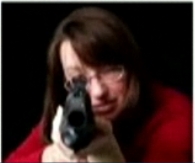 In an astonishing story of bureaucracy gone mad, Betsy Ramsdale, a Beaver Dam, WI Middle School teacher, has been suspended for the unspeakable act of actually displaying a photograph of herself handling a personally owned firearm on her Facebook page.  The photo was apparently brought to the attention of school officials by a “concerned staff member” of the school.

When you recover from the shock of a teacher actually being allowed to own and proudly display firearms in her private life, then consider the following.  If we establish the precedent of allowing teachers to be suspended (or worse) for doing nothing more than displaying photos of themselves engaging in perfectly legal behavior that a “concerned staff member” finds objectionable, then where does it end?  What if the teacher was openly lesbian and displayed a photograph of herself expressing affection with her partner and the “concerned staff member” was a homophobe?

The “what if” scenarios could go on and on, but they all ultimately distill down to the issue of whether or not we should allow the opinion of one person to override the rights of another.  Even the most anti-gun of citizens should fear such a precedent.

To their credit, the American Civil Liberties Union of Wisconsin was quick to react to this blatant infringement of Ms. Ramsdale’s 1st Amendment rights.  In a statement issued by Executive Director Chris Ahmuty, they say “Absent any evidence that the teacher poses a threat, the district should not over-react to the sight of a gun in one of their employee’s hands.”  On their blog, they go on to say that “The context of the photo, which shows Ramsdale training the rifle toward the camera, involves the fact that her page is both personal and that she is a gun enthusiast. News reports haven’t detailed any other grounds for concern about the teacher’s behavior or any sinister intent.”

I couldn’t agree more and Mr. Ahmuty and the ACLU of Wisconsin are to be commended for recognizing the fact that, absent evil intent, a firearm in the hands of a citizen is not something to be feared.

With the hard work of dedicated activists like Mr. Ahmuty, I have every confidence that Wisconsin will come to see the error of their unconstitutional ways.

In addition, his open carry advocacy has been featured on Nightline and The Daily Show With Jon Stewart.
View all posts by John Pierce →
This entry was posted in Guns at Work, Wisconsin. Bookmark the permalink.