An open letter to Senator Jim Webb and pro-gun democrats 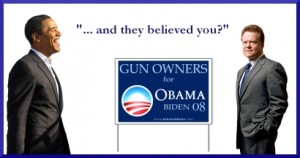 As both an honored veteran of the armed forces and one of the Senate’s most outspoken pro-gun democrats, your endorsement of the candidacy of Barack Obama carried great weight with gun-owning democrats and moderates.

After all, his voting record regarding gun-rights and the right to self-defense was abysmal and gun owners were justifiably hesitant to believe his sudden assertion that he “supported” the right to keep and bear arms.

It wasn’t until you, and other pro-gun democrats, began to speak out that the tide began to turn. And why wouldn’t it? Your voice means something to those of us who believe in the right to keep and bear arms. You have earned our trust, both by your service to our country and by your steadfast devotion to the 2nd Amendment. When you said that you trusted Barack Obama to “protect our right to keep and bear arms”, you extended the goodwill that you have earned onto him.

And you were not the only one. As Election Day drew near, pro-gun democrats closed ranks behind Senator Obama. In districts across America, trusted Senators and Representatives stood in front of their constituents and told them that Senator Obama would not ban their guns.

Consequently, on November 4th, 2008, Senator Obama, aided by the votes of millions of American gun owners, was elected President of These United States. Gun owners who had voted for America’s first African-American president were jubilant. They had taken part in an historic event and had done so without compromising their rights.

Or so they believed … But storm clouds were quick to form on the horizon. On February 20th, 2009, rabid anti-gunner Eric Holder was sworn in as President Obama’s Attorney General. And on Wednesday, February 25th, less than 45 days into the Obama presidency, Attorney General Holder held a press conference announcing plans for sweeping gun control proposalsand publicly shredded the trust that you had placed in “your friend” Barack Obama.

But he did more than that. By extension, he shredded the trust we have in you and your pro-gun counterparts. We had believed that we could count upon you to place ideals above party-politics. In looking back at that belief now, we can see how naïve it was. Make no mistake about it, we will not do so again.

If you wish to regain the trust that the Obama Administration so cavalierly cast aside, we will expect you to oppose these measures at every turn. We feel betrayed and the next election is not that far away.

In addition, his open carry advocacy has been featured on Nightline and The Daily Show With Jon Stewart.
View all posts by John Pierce →
This entry was posted in President Obama, United States Congress. Bookmark the permalink.