The first thing you do is drag him inside 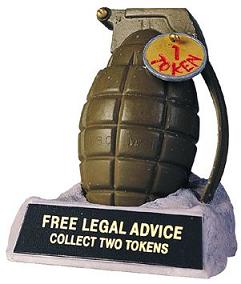 There is an old saying that “free” advice is worth exactly what you pay for it.  However, in the case of “free” legal advice, this is not exactly correct.  It actually has the potential to cost you a great deal and this is especially true where criminal law is implicated such as in the case of self-defense.

In fact, the right to use force in defense of self and others is one of the least understood legal concepts in American jurisprudence.  Unfortunately, most citizens erroneously believe that they do understand the concept based upon simplistic word-of-mouth anecdotes and advice.

Case in point, I will bet good money that you have heard the advice “If you shoot an intruder on the porch, the first thing you do is drag him inside”.  I have yet to meet someone who hasn’t heard this gem from an uncle, grandfather or cousin twice-removed.  The person giving the advice often seeks to imbue it with authority by swearing that it was a police officer, judge or attorney who shared this sage wisdom with them.

As a law student and as a self-defense instructor, I can say without fear of contradiction that this is almost certainly the single worst piece of legal advice that you have ever been given.  The parameters under which one may justifiably use deadly force are extremely narrow and do not depend for their validity upon occurring in any given place.  If you are justified in using deadly force upon your porch and then decide to avail yourself of this advice, the cloud this will place upon your actions will put you in a virtually indefensible legal position.

Think about it.  The logical implication of this anecdote is that the simple presence of an intruder in your home would provide legal justification for you to use deadly force against that intruder.  However, nothing could be further from the truth.  Imagine a scenario under which you and your family return home to find that a neighbor has become inebriated, broken into your house, and is passed out on your couch.  Based upon the advice embedded in the “drag him inside” anecdote, shouldn’t you have the right to use deadly force against this neighbor?  Of course not!  There is no threat embodied by the unconscious intruder and it is imminent threat that is the real legal touchstone where self-defense is concerned.

Having identified imminent threat as the threshold issue, I could then go on-and-on describing additional factors that will be considered in any legal case where a citizen has invoked self-defense as a justification for the use of deadly force.  I would then have to note that many of the factors vary significantly from state to state.  I could attempt to provide a broad summary that would be generally valid across the country by saying something like “Use of deadly force is only valid as an option of last resort when there is an imminent threat to life or limb, as judged from the viewpoint of a reasonable person, from which one may not safely retreat.”

However, this does not lend itself to a short and succinct statement that can be passed on at the watercooler by your cousin Bob and therefore, the “drag him inside” urban legend lives on.

How about we try to start a new saying?  “I will not accept legal advice from my cousin!”

In addition, his open carry advocacy has been featured on Nightline and The Daily Show With Jon Stewart.
View all posts by John Pierce →
This entry was posted in Myths & Misconceptions, Self Defense. Bookmark the permalink.