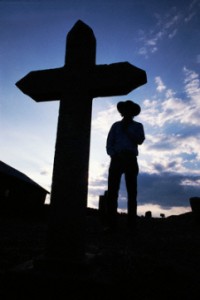 This is a poem I had written several years ago for an Easter church service at a Cowboy Mounted Shooting event.  I would like to share it with you.  I hope that even those of you who are not Christian will appreciate the message and the symbolism.  Happy Easter!

Well, the ramrod was a wicked man
His name was simply Death
He ruled over all the herd
Of those who once drew breath

And the cowboy spoke to Death
So everyone could hear
“Do not mistake me for the lamb.
I am a lion here.”

“The price I paid to walk this path
Was steep, but gladly paid.
And now I call you out
For your destiny is laid.”

In addition, his open carry advocacy has been featured on Nightline and The Daily Show With Jon Stewart.
View all posts by John Pierce →
This entry was posted in Philosophical. Bookmark the permalink.