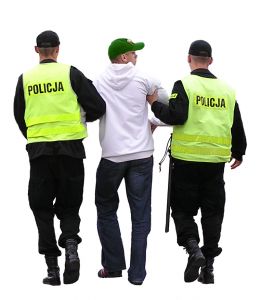 The right of the people to be secure in their persons, houses, papers, and effects, against unreasonable searches and seizures, shall not be violated … – 4th Amendment

One of the most common interactions between law-abiding gun owners and law enforcement occurs when  a citizen, unfamiliar with the practice, sees someone openly carrying a firearm in a store, or a park, or just walking down the street.  In many cases, they call the police to report what the media has lead them to believe must be a crime.

This usually results in a law enforcement officer approaching the person who is openly carrying their firearm to “ask them a few questions.”  This is what we call a law enforcement “stop”.  But not all stops rise to the level of a seizure subject to 4th Amendment protection.

The modern era of 4th Amendment jurisprudence started in 1968 with the landmark ruling in Terry v. Ohio.  Under Terry, a seizure occurs “[o]nly when [an] officer, by means of physical force or show of authority, has in some way restrained the liberty of a citizen.”

After Terry, there are three broad categories of allowable “stops”, only one of which is not considered a seizure of the person.  These are consensual stops, Terry Stops, and detentions which amount to arrest.

A consensual stop is one in which law enforcement approaches a citizen and initiates a conversation but the citizen is free to leave at any time.  This is the only of the three allowable stops which is not a seizure of the person for 4th Amendment purposes.

A perfect example of a consensual stop is this encounter between an open carrier and officer Evans of the Blacksburg, Virginia police department.  The officer asked his questions and, when the open carrier chose not to answer, identified himself and told the open carrier he was free to go.  The officer was knowledgable and professional.  I cannot commend him enough.

But not all officers are as professional and ethical as Officer Evans.  While claiming that a suspect is “free to leave at any time“, they often use interrogative techniques that make it difficult for a reasonable person to know whether they are actually free to leave.

This concept of an objective ‘reasonable person’ test first surfaced in the 1980 case of U.S. v. Mendenhall where the court articulated the rule that “a person has been ‘seized’ within the meaning of the Fourth Amendment only if, in view of all of the circumstances surrounding the incident, a reasonable person would have believed that he was not free to leave.”

While the holding in Mendenhall sounds like a bright-line rule, the courts have continued to allow law enforcement significant latitude in this regard.  A recent example of this comes to us from Pima Arizona where an officer tells the open carriers that they are free to leave but when they attempt to leave, they are chased down and detained.

Take note of the discussion on the video of whether ID is required when stopped by police.  We will discuss that in a future segment of this column.

After Mendenhall, the next important seizure case occurred in 1991 with Florida v. Bostick.  Bostick involved officers boarding a bus at a bus stop and asking passengers if they would consent to a search of their luggage.  The twist in Bostick was the fact that the encounter occurred in a bus.  The defendant argued that, because he did not want to leave the bus and be left behind and thus “did not believe he was free to leave”, he was ‘seized’ without probable cause or even reasonable suspicion.

The court in Bostick stated that the “free to leave” language from the rule must be read in context.  They noted that, when an encounter occurs in an area where the citizen wishes to remain such as a bus, airplance, etc, the rule should be interpreted as whether they “would feel free to decline the officers’ request or otherwise terminate the encounter.”

There was also a second important 4th Amendment seizure case decided in 1991.  In the case of California v. Hodari the court refined the two prong test from Terry which required that, in  order for a seizure to occur, there must be either physical force or a show of authority.  Under Hodari, a mere show of authority is not sufficient to establish a seizure.  The suspect must also submit to that show of authority.

A Terry Stop, named aptly enough for the aforementioned case of Terry v. Ohio, is a ‘seizure’ of the person (there is also a ‘search’ component to Terry which I will address in a future article but here we are focused on ‘seizures’).  According to the court, it is justified when “swift action based upon on-the-spot observations of the officer on the beat is required.”  No warrant is required for a Terry Stop, nor is there a requirement for probable cause such as would be a prerequisite for obtaining a warrant.  Rather, a Terry Stop requires only “reasonable suspicion that criminal activity may be afoot.”  If the officer wishes to search or “frisk” the person he is seizing, they must also have reasonable suspicion that they “may be armed and presently dangerous” but this is not required to simply seize the person. 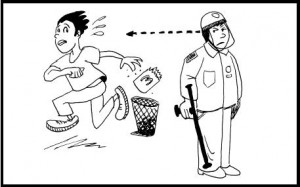 If it isn’t the same as probable cause then what is reasonable suspicion?  According to the court in  Alabama v. White, reasonable suspicion is  “considerably less than proof of wrongdoing by a preponderance of the evidence.”  So what does that mean in real life?  Unfortunately, it is a low-bar indeed.  Reportedly, a common saying amongst law enforcement circles is that “Reasonable suspicion is what my nightstick says it is.”

The requirement of reasonable suspicion from Terry is known today as reasonable and articulable suspicion or RAS.  And if an officer has RAS that criminal activity may be afoot and that the persons with whom he is dealing may be armed and presently dangerous, then the seizure is considered justified at its inception.  One can easily understand why this broad rule has been repeatedly refined since Terry.

In Illinois v. Wardlow, the court tackled the question of whether running from identified police officers (or marked police cars) in a high crime area gives rise to RAS.  The court held that it generally does despite a rousing dissent from Justice Stevens in which he noted that minority citizens rightly and reasonably fear police encounters even absent criminal activity.  The court stated that this is not a per-se rule but depends upon a number of factors beyond simple flight in a high-crime neighborhood.  These include:

In Florida v. Royer, the court held that a Terry Stop, valid at its inception, does not cross the line into a detention that amounts to arrest when there is good reason to move a suspect some distance from the original encounter within the same building or general area.

In Pennsylvania v. Mimms, the court held that during a valid traffic stop, officers may order a driver out of the vehicle even if the stop is based upon the flimsiest of violations.  And in Maryland v. Wilson, the court held that the same rule applies to passengers.  Brendlin v. California clarified that in a traffic stop, both the driver and any passengers are seized and thus all have standing to challenge the constitutionality of the seizure.

Detention That Amounts to Arrest

The courts have articulated a number of situations where detainment exceeds the “on the street exigency” of Terry and  rises to the level of an effective arrest.

In  Hayes v. Florida, the court held that a suspect being taken against their will to the police station for fingerprinting or other investigative purposes, regardless of how brief the detention, would cross the line between a Terry Stop and an arrest.  However, they also noted that fingerprinting at the scene of a Terry Stop is not necessarily violative of the 4th Amendment.

In United States v. Sharpe, the court articulated a two prong test to determine whether a given detention crosses the line between a Terry Stop and an arrest.  Those prongs are:

The Sharpe court also added a “bolt-on” concerning the length of the detention.  This bolt-on third prong also requires that the officers “diligently pursue a means of investigation that [is] likely to confirm or dispel their suspicions quickly.”

If any of these factors are not satisfied then the detention amounts to an arrest and probable cause is required.  If the office did not have probable cause then the seizure may be challenged.

If you find yourself in an encounter with law enforcement, you should know that you always have the right to refuse consent to any request.  If a reasonable person would not feel free to politely decline the officers’ requests and terminate the encounter (as seen in the first video above), then you have been ‘seized’ and thus are entitled to 4th Amendment protection.  The key question is “Am I free to leave?” and if the answer is anything other than “No” then do so.  If it is “No”, then lawyer up, do not resist other than to state that you do not consent to any search or detainment, and keep the video camera running if you are in a jurisdiction where such recording is legal.

UPDATE:  The next chapter of the “Gun Owners Guide to the 4th Amendment” has been published.    It covers Stop and Frisk.

DISCLAIMER:  Nothing contained herein should be construed as legal advice nor does it give rise to an attorney-client relationship.  For legal advice, you should contact a member of your state’s Bar association.

In addition, his open carry advocacy has been featured on Nightline and The Daily Show With Jon Stewart.
View all posts by John Pierce →
This entry was posted in Fourth Amendment, Open Carry. Bookmark the permalink.

16 Responses to Gun owners’ guide to the 4th Amendment: Seizures