Anti-Gun Wacko of The Week: Grand Island NE School Board 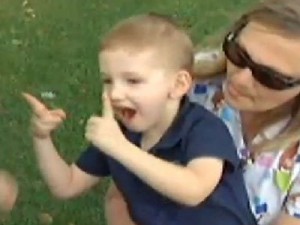 When I wrote last week’s Anti-Gun Wacko of the Week column about University of Colorado Professor Jerry Peterson, I chose the name of the column on a bit of a whim. I didn’t really expect that I would find that level of outrageousness on a weekly basis.

But by now, you would think I would know better than to underestimate the ability of bureaucrats to make blindly stupid decisions.

And that brings us to today’s story about 3-year-old Hunter Spanjer.  Hunter is, by all reports, a happy and well-loved child who attends preschool in Grand Island Nebraska. Hunter is just like all the other boys and girls except for one thing … the school board wants to take away his name.

You see … Hunter is deaf and uses American Sign Language (ASL).  And the ASL symbol for Hunter or hunting is shown in the video below.  Hunter then crosses his fingers to show it is a formal name instead of the concept of hunting.  It is the official sign for his name.

But the Grand Island School Board doesn’t care.  They say that the sign runs afoul of their ‘Weapons in Schools’ policy which bans “any instrument … that looks like a weapon.” Forgetting for a second the ridiculousness of banning objects based upon mere looks, the level of stupidity and insensitivity that it takes to stretch such a rule to encompass a deaf child using official ASL signs is staggering.

As a matter of fact, it has been brought to my attention that math class will apparently have to be cancelled for all deaf students as well since the number 21 also looks like a ‘scary’ finger gun.

I personally believe that their stance is in violation of the Americans With Disabilities Act (ADA) as well as being an unconstitutional abuse of power and discretion.  And I am not alone in that assessment.  The National Association of the Deaf is providing legal services to help Hunter’s family fight this bigotry and stupidity.

I imagine that there are an awful lot of people who are thinking of other hand gestures that might be appropriate for the Grand Island School Board right now.  I will leave you with that cheerful thought as we all wish Hunter’s family the best in fighting for his right to keep his very name.

UPDATE:  The ACLU has reportedly also joined the fray and the school board, overwhelmed by the response, has issued the following statement which muddies the waters further without actually answering any questions.

“Grand Island Public Schools has not changed the sign language name of any student, nor is it requiring any student to change how his or her name is signed. The school district teaches American Sign Language (“ASL”) for students with hearing impairments. ASL is recommended by the Nebraska Department of Education and is widely used in the United States. The sign language techniques taught in the school district are consistent with the standards of the Nebraska Department of Education and ASL.

Grand Island Public Schools is not requiring any current student with a hearing impairment to change his or her sign language name. Our mission remains: Every Student, Every Day, a Success!”

In addition, his open carry advocacy has been featured on Nightline and The Daily Show With Jon Stewart.
View all posts by John Pierce →
This entry was posted in Abuse of Discretion, Abuse of Power, Administrative Regulations, Kids, Nebraska, Zero Tolerance Policies. Bookmark the permalink.

8 Responses to Anti-Gun Wacko of The Week: Grand Island NE School Board