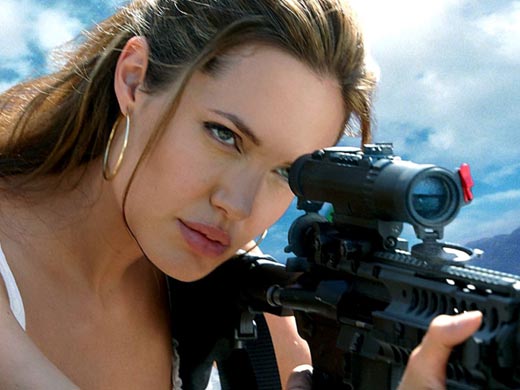 “America is a country founded on guns. It’s in our DNA. It’s very strange but I feel better having a gun. I really do. I don’t feel safe, I don’t feel the house is completely safe, if I don’t have one hidden somewhere. ”

In 1999, back when the Brady Campaign was upfront about their goals and called themselves Handgun Control, Inc., they ran a full page ad in USA Today entitled “Open Letter to the National Rifle Association.”

The letter called for a nationwide “one handgun a month” rule, waiting periods for handgun purchases, an end to private sales, and a complete and permanent ban on so-called “assault weapons” as well as normal capacity magazines.

Signing this “open letter” were dozens of Hollywood stars and media personalities. The list included many names that you would expect to see promoting gun control. Alec Baldwin was a signer, as was Candice Bergen.  Other names included Cher, Kevin Costner, Phil Donahue, Richard Dryfus, and Spike Lee.

But there are other signers who might surprise you and even more surprising celebrities who have supported gun-control during their careers. In the case of these stars, the hypocrisy is almost palpable.  These are actors who make a great deal of money starring in movies that glorify gunplay but who wish to disarm law-abiding citizens.

So why talk about this now?  Well … the impetus for this article is the recent release of the movie Expendables 2. This movie is the perfect microcosm of the divide on gun rights in Hollywood. The movie stars some of the most pro-gun stars in Hollywood while simultaneously featuring some of the most anti-gun.  And which stars are in which category might just amaze you.

On the pro-gun side we will start with Chuck Norris. Where gun rights are concerned, you can’t say enough about Chuck Norris. He is a truly dedicated supporter of gun rights, a celebrity spokesperson for the NRA, and the honorary chairman of the NRA’s “Trigger The Vote” campaign.

The next pro-gun star from the Expendables is Bruce Willis. In a 2006 interview, Willis made it clear that he supports the Second Amendment and considers gun-control bad public policy

“If you take guns away from legal gun owners then the only people who would have guns would be the bad guys.”

But now we must turn to the anti-gun stars.  I will start with Arnold Schwarzenegger. Like many politicians before him, Arnold’s run for the governorship of California featured a promise that he “supports the Second Amendment” followed by a list of “responsibilities that gun owners must follow in owning a firearm”.

From Arnold’s perspective, those responsibilities included supporting the Brady Bill, submitting to the arbitrary ban on popular sporting firearms, giving up private sales, and complying with storage requirements that make self-defense virtually impossible.  When pushed on the issue by reporters, he stated “I’m for gun control. I’m a peace-loving guy.”

And finally we turn to Sylvester Stallone.  Stallone, living in the UK, was asked about US gun culture and made it very clear that he is no friend of gun owners, calling for door-to-door confiscation of all handguns.

“Until America, door to door, takes every handgun, this is what you’re gonna have. It’s pathetic. It really is pathetic. It’s sad. We’re living in the Dark Ages.”

But a new era appears to be dawning in Hollywood, with many stars voicing their support for gun rights.  Recently, in an interview with the BBC, Ice T was asked about gun rights in the US and deftly defended the right to keep and bear arms in the face of hard questioning by the interviewer.  I salute Ice T for his position and his debating skills.

And finally, the dynamic duo of Brad Pitt and Angelina Jolie are apparently living the gun owners dream.  Brad recently bought Angelina a private shooting range at their home in France valued at over $400,000. And why wouldn’t he? After all, Angelina is quoted as saying that shooting guns is a bit of an “aphrodisiac.”

But Brad’s love of guns doesn’t end there.  In a recent interview with British magazine Live, he waxed somewhat poetic about his childhood with guns.

“I got my first BB (air) gun when I was in nursery school. I got my first shotgun by first grade. I had shot a handgun by third grade and I grew up in a pretty sane environment.”

Talking about the Aurora Colorado shooting, he went on to defend gun ownership by law abiding citizens as a bulwark against criminals.

“I absolutely don’t believe you can put sanctions or shackles on what is made. Nor do I want to pretend the world is different than what we witnessed that night.

America is a country founded on guns. It’s in our DNA. It’s very strange but I feel better having a gun. I really do. I don’t feel safe, I don’t feel the house is completely safe, if I don’t have one hidden somewhere.”

He ended the interview with a slap at those who would use such tragedies to promote their anti-gun agendas.

“To turn around and ask us to give up our guns … we’re going to give up ours and the bad guys are still going to get theirs. It’s just in our thinking. I’m telling you, we don’t know America without guns.”

UPDATE:  The new Judge Dredd, Karl Urban, is exposed as a pro-gun-control hyprocite.

In addition, his open carry advocacy has been featured on Nightline and The Daily Show With Jon Stewart.
View all posts by John Pierce →
This entry was posted in 'Assault Weapons', Brady Campaign, Hollywood, Media Views on The Second Amendment, Movies, Myths & Misconceptions. Bookmark the permalink.