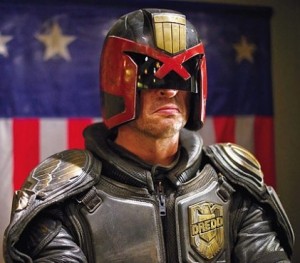 Hot on the heels of yesterday’s column about Hollywood’s evolving take on gun rights, comes the tale of yet another star who profits greatly from glorifying guns in film while apparently embracing gun control for all us ordinary mortals.

The star in this case is New Zealand born actor Karl Urban.  While not yet what you would call an A-list star, his career is definitely up-and-coming.

He is best known for two roles, Bones on the 2009 Star Trek reboot and Russian Secret Service assassin Kirill in The Bourne Supremacy. And on September 21, he will return to the big screen with his biggest role yet as Judge Dredd in a much-touted 3D reboot of the popular and gritty comic book franchise.

As you may recall, the last big screen appearance of Judge Dredd featured rabid anti-gunner Sylvester Stallone and one has to wonder if there is some sort of curse on the character from a gun rights perspective.

I say curse because, as a comic fan, I was quite looking forward to the Dredd reboot.  In fact, it was while looking for the updated trailer featuring the song by La Roux that I discovered Urban was a proponent of gun control.

The story goes something like this.  In the last week of August, Karl Urban and writer Alex Garland held a round table interview in London about the upcoming movie. There was a lot of light-hearted banter about the movie and then Urban was asked whether there is serious social commentary in the movie.  His response is the impetus for this article.

“That’s the world Dredd is set in, it’s set in a society that is on the verge of chaos and collapse and it’s not that big a leap.  We take our freedoms pretty much for granted; I think it’s really interesting to look at a society where all those freedom has been taken away … It certainly makes me appreciate that I live in a democratic country that has good gun control.”

And then he laughed. The bugger actually laughed!

I was floored when I read this.  I mean … I really shouldn’t expect deep thought from entertainers but I find the fact that he can bemoan the loss of rights while simultaneously praising gun control to be utterly sickening.

Being born and raised in New Zealand obviously contributes to his support of gun control but that only strengthens the argument that we must be just as vigilant in fighting cultural attacks on gun rights as we are with legislative and judicial attacks.

Now … out of fairness, I should note that this comment is the only time I could find that Urban has spoken out about gun control and the NRA does not include him on their list of anti-gun organizations and celebrities so there may yet be hope for him.

Perhaps a little more time in America will help him come to understand that “chaos and collapse” can come for any family with a crash in the night and only the proper self-defense tools will allow them to prevail.

In addition, his open carry advocacy has been featured on Nightline and The Daily Show With Jon Stewart.
View all posts by John Pierce →
This entry was posted in Celebrities, Gun Control, Hollywood, Media Views on The Second Amendment, Movies, Popular Culture. Bookmark the permalink.