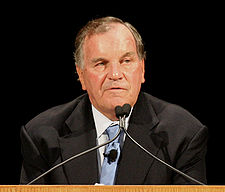 “To what purpose are powers limited, and to what purpose is that limitation committed to writing, if these limits may, at any time, be passed by those intended to be restrained?” – Chief Justice John Marshall (Marbury v. Madison)

Hard on the heels of yesterday’s Supreme Court ruling in McDonald v. Chicago that the Second Amendment to the US Constitution protects an individual right to bear arms for self-defense and that the right thus protected is incorporated against state and local governments, Chicago Mayor Daley expressed his contempt for both the Court and the citizens whose rights he has trampled.

In an afternoon press conference, Daley announced that the city would enact new ordinances making it as difficult as possible to purchase and own a gun in Chicago. During his rant, he promised to seek ways to attack the right to bear arms from the supply side, vowing to go after manufacturers and crack down on gun shops and gun shop owners. He also noted that only “responsible adults” would be allowed to purchase or possess guns and left open the extremely disturbing question of who gets to determine which citizens are responsible and therefore ‘worthy‘ of civil rights.

After all, when you hear Mayor Daley proclaim his intentions to subvert the clear ruling of the Supreme Court, it is hard not to remember Governor George Wallace standing in the doorway of the University of Alabama’s Foster Auditorium blocking access to African-American students Vivian Malone Jones, Dave McGlathery and James Hood after the 1954 Supreme Court ruling in Brown v. Board of Education. 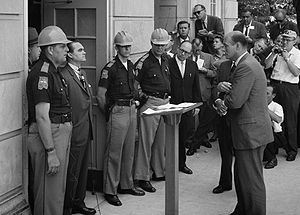 Then, as now, a seasoned politician felt his opinion superseded the rights of citizens and was willing to use the power of their office to deny those rights to citizens they deemed ‘unworthy.‘

But as I listened to Mayor Daley equate gun owners with “drug thugs” and chastise the federal government for not doing more to make legal gun ownership more difficult, I found it incredibly ironic. This is the mayor of a city whose 28 year absolute ban on handgun ownership has completely disarmed law-abiding citizens and yet, on a recent weekend in Chicago, with the ban in full effect, there were 54 shootings which resulted in 10 deaths, including a baby girl.

The problem in Chicago is not guns in the hands of law-abiding citizens. It never was. The problem is crime … crime driven by poverty, and hopelessness, and drug abuse, and all the social ills that accompany them. And because Mayor Daley, in his 21 year tenure, has not been willing or able to address these very difficult problems, he seeks to blame gun owners.

This elitist defiance should not surprise those familiar with Chicago politics and the antics of the Daley administration but it should serve as a grim reminder to gun owners and civil libertarians that despite the victories in Heller and McDonald, the legislative and judicial battles are far from over.

In addition, his open carry advocacy has been featured on Nightline and The Daily Show With Jon Stewart.
View all posts by John Pierce →
This entry was posted in Abuse of Power, Chicago, McDonald v. Chicago, Second Amendment Case Law. Bookmark the permalink.