The tyranny of the bigoted comes to Madison Wisconsin 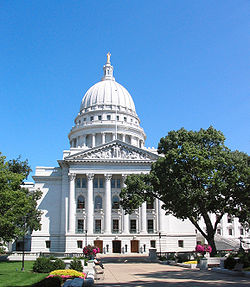 “An unjust law is itself a species of violence. Arrest for its breach is more so.” – Mahatma Gandhi

A little over a year ago, I wrote about the disorderly conduct arrest of Harvard professor Henry Louis Gates Jr.  At the time, I noted that ‘disorderly conduct‘, ‘disturbing the peace‘ and other such catch-all offenses pose one of the greatest threats to the free exercise of civil rights in America.

With no clear definition of what constitutes behavior that is ‘disturbing’ or ‘disorderly’, many in law enforcement use such laws as a way to both control and punish citizens for otherwise legal and constitutionally protected behavior.

I had hoped at the time that the public attention directed toward the problem by the arrest of Professor Gates would have encouraged legislative reform or, at a minimum, better training of law enforcement.  Unfortunately, as is often the case where civil rights are concerned, the spotlight quickly dimmed and nothing has changed.

And thus the harassment suffered by five law-abiding members of Wisconsin Carry at a Culver’s restaurant in Madison, Wisconsin last Saturday evening should come as little surprise.

Arriving at the restaurant, the five victims entered, ordered their food and sat down … unaware that a 62 year old customer who had noticed the properly holstered handguns on their sides had called 911.  In the call, the 62 year old women reportedly told police that she “didn’t know what the law was” and that she thought she “should at least call so the police can come and check it out” because she “didn’t want to be that one person that saw guns and didn’t call, and then have something terrible happen.”

Police responded in force with eight officers approaching the table where the five men were eating dinner.  And I should note that up until this point, the encounter was completely within the bounds of propriety.  The police had received a call … and in the interest of public safety, they had responded.  But here is where the officers departed from the law.  Instead of verifying that the men were nothing more than law-abiding citizens and leaving, officers escalated the situation by demanding ID.

Now for those of you unfamiliar with the laws of Wisconsin, let me assure you that there is no requirement in Wisconsin law to carry your papers with you and produce them upon demand.  Officers may request ID.  However, they have no authority to demand it of citizens who are doing nothing more than exercising what is a constitutionally protected activity in Wisconsin.  But these officers were insistent, stating “Identify yourself or you will be arrested for obstruction.”

And the officers made good their threat.  When two of the men at the table, knowing that the officers lacked the authority to make such a demand, refused to provide ID, they were handcuffed, placed in a patrol car and despite stating emphatically that they did not consent to a search of their person, were physically restrained while their wallets were taken from them by force.  Upon using the seized IDs to verify that the men were not felons or otherwise disqualified from possessing firearms, they were released, had their firearms returned, and were given a ticket for obstruction.  The officers subsequently left the men at the restaurant and departed.

The charge of obstruction was made under the following statute:

5.06 ASSISTANCE IN MAKING ARREST – LIABILITY FOR RESISTING OR OBSTRUCTING AN OFFICER.

(1) Whoever, without reasonable excuse, refuses or fails upon command, to aid any person known to him to be a peace officer may be fined not more than one hundred dollars ($100). This section does not apply if under the circumstances the officer was not authorized to command such assistance.

(2) Whoever knowingly resists or obstructs an officer while such officer is doing any act in his official capacity and with lawful authority, may be fined not more than five hundred dollars ($500). In this section:

(a) “Officer” means a peace officer or other public officer or public employee having the authority by virtue of his office or employment to take another into custody.

(b) “Obstructs” includes without limitation knowingly giving false information to the officer or knowingly placing physical evidence with intent to mislead the officer in the performance of his or her duty including the service of any summons or civil process. (Am. by Ord. 9977, 3-14-90)

(3) Whoever hinders, delays or prevents an officer from properly serving or executing any summons or civil process, is civilly liable to the person injured for any actual loss caused thereby and to the officer or his superior for any damages adjudged against either of them by reason thereof.

In analyzing this statute, it immediately becomes clear that providing false information to an officer may constitute obstruction but silence is not addressed at all.  In fact, if we look to the Wisconsin courts, we find that this question is long settled law.  In a 1995 case addressing a similar case, the courts held that “Mere silence, standing alone, is insufficient to constitute obstruction …Without more than mere silence, there is no obstruction.” Henes v. Morrissey, 533 N.W.2d 802 (1995).  Even more interestingly, in the same case, the courts stripped the offending officers of qualified immunity, stating that “no reasonable person could believe that the obstruction statute includes within its terms persons who fail to identify themselves. Nor could a reasonable person determine that any other statute authorizes the arrest of persons for refusing to state their names. … Hence, the deputies in this case are not entitled to qualified immunity.”

As discovered by the Vice President of Wisconsin Carry, Hubert Hoffman, this issue had also been specifically addressed in a City of Madison Police Department legal update.  Based upon this information, in my opinion it is clear that in this case, officers will not enjoy qualified immunity.  And it seems that someone must agree with me because suddenly today we find that the obstruction charges have been rescinded.

However, in a move that can only be described as a combination of retaliation and intimidation, all five of the men have now been charged with disorderly conduct based upon the fact that the 62 year old woman who called police, in a subsequent interview, made the statement that she was “somewhat rattled” and “uneasy” when she saw the holstered handguns.

Let me get this straight … The five men, two of whom police had returned firearms to, and who were so ‘dangerous’ that the officers on the scene left them fully armed amongst the other patrons of the restaurant and departed, are now seen to have been engaging in disorderly conduct.

In a stunning memo by the Madison Police Department released today, the Madison Police seem to be encouraging citizens to call 911 whenever they see citizens lawfully open carrying and imply that they will use the disorderly statute’s vague requirements of “conduct of a kind likely to cause a disturbance” to arrest all such open carriers they encounter.

The memo went on to state that the basis for the charge was the 62 year old woman’s recognition of the ‘potential for violence‘ inherent in the handguns and her fear of that potential.  Given those marching orders, I suspect that it is only a matter of time before a bigoted patron of a restaurant, concerned over the rather tough looking biker couple dining at the next table, calls 911 and demands they be arrested for a disorderly conduct charge because he thinks them to have a ‘potential for violence.’  And perhaps the police will comply.  After all, if the police have to respond, the memo seems to suggest, someone’s getting arrested.

So where does this go from here?  Culver’s has already spoken out, declining to institute a ‘no firearms’ policy in their restaurants and gun owners should reward them for it with their wallets.  May I suggest the ButterBurgers?

As for the five victims in this case, I suspect that I will be writing more about them in future columns as they decide upon an appropriate course of action.

In addition, his open carry advocacy has been featured on Nightline and The Daily Show With Jon Stewart.
View all posts by John Pierce →
This entry was posted in Abuse of Discretion, Law Enforcement Misconduct, Open Carry, Wisconsin. Bookmark the permalink.