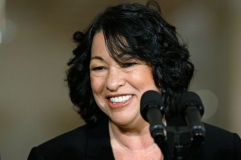 President Obama and I agree on one thing. It is high time that a Hispanic justice sit on the nation’s highest court. After all, as the fastest growing segment of the population, Hispanics are an integral part of the strong, diverse future I see for America and that diversity needs to be reflected in our courts.

However, Judge Sotomayor may not be the right nominee to fill that need.

While democrats have been quick to declare their unwavering support without fully understanding her judicial qualifications, conservatives have been equally quick to attack her while similarly ill-informed.

But many Americans, myself included, have reserved judgment while taking the time to evaluate Judge Sotomayor’s history. Since last Tuesday when President Obama announced Judge Sotomayor’s nomination to replace retiring Supreme Court Justice Souter, I have spent a great deal of time reading a number of her most controversial opinions. I have also studied the details of the accusations put forth against her by those who oppose her nomination.

Given my belief that a person’s position on gun rights is a reliable bell weather of their overall position on individual rights, I have obviously approached this research with a particular focus on her opinions about civil rights in general and gun rights in particular. Having done so, I believe that I have a unique perspective that my readers might find interesting. After all, as a libertarian and a law school student, I see many of the issues that have been raised quite differently than most partisans on either side.

In law school, the first step taken when addressing any legal problem is to identify the issue that is actually being presented. In many cases, the answers being given have little to do with the actual issue at hand and this may very well be the case here.

The issue before us, as I see it, is simply this … Whether or not Judge Sotomayor possesses those qualities necessary to adequately serve as a Supreme Court Justice?

This rather general statement then leads us to a second issue that must be answered before we can address the first. What are the qualities that are necessary for one to adequately serve as a Supreme Court Justice?

Of course, the specific issues that I feel are important will almost certainly not correlate with those of a partisan from either the left or the right, but I believe we can all agree that the single most important quality necessary for a Supreme Court Justice is an unwavering belief in both the word and spirit of the fundamental, individual freedoms embodied, recognized, and protected by the United States Constitution and a willingness to apply this belief to any problem before the High Court regardless of the outcome.

Now that we know the question we are trying to answer, let’s take a look at the criticisms that have been leveled against Judge Sotomayor.

Member of the National Council of La Raza

This is a criticism that all liberty loving individuals should be quick to denounce.

Would we sit still and allow the criticism of a pro-gun nominee because they were a member of Gun Owners of America or the National Rifle Association? Of course not! Neither should we allow Judge Sotomayor to be criticized for her membership in an organization that supports Hispanic civil rights issues.

If she is anti-gun, then we will oppose her based upon that unconstitutional belief, but it does us no good to oppose her because she too wishes to further the civil rights of Americans and immigrants.

One of the charges that have been leveled at Judge Sotomayor is that she is an “activist judge.” While this term is a broad one which may have multiple meanings, her detractors appear to be using it in reference to a statement she made in a speech at Duke University in 2005 in which she said that the courts of appeal are where policy is made.

Let me start by saying that on its face, this statement does not overly concern me. She did not say that the courts are where law is made which is how many are interpreting her statement. Contrary to the partisan rhetoric, the courts are often where public policy decisions are made. The key to understanding this is to understand what is meant by the term “public policy” in this context.

This complex interpretive act, when done properly, may fairly be called the creation of policy. Judge Sotomayor should not be criticized for having accurately described the role that the appeals court plays in our judicial system.

However, because personal ideology and perspective are unavoidably intertwined in the way that jurists will perform this interpretation, this makes it even more important that we closely look at Judge Sotomayor’s history regarding gun rights.

On a lighter note, shortly after Judge Sotomayor’s nomination, an article, supposedly written by a Nathan Figler of American News, Inc, began to appear on various internet sites and was even repeated by Fox News.

In this supposed news article, Ms. Sotomayor is accused of having penned three legal theses while at Princeton Law including one entitled Deadly Obsession: American Gun Culture in which she was reported to have stated that the Second Amendment to the Constitution did not actually afford individual citizens the right to bear arms. She supposedly went on to make the amazing assertion that the passage of the Bill of Rights actually made individual ownership of firearms illegal.

There are any number of issues with this report, starting with the fact that the website given for American News, Inc is non-existent, Nathan Figler does not appear to be a journalist, Princeton Law only requires one thesis (although they do write several junior papers), and finally, the entire article seems to be written to cater to the worst fears of conservatives.

We have a number of real cases where Judge Sotomayor’s opinions about gun rights are made evident. We do not need to make ourselves look foolish by buying into urban legends.

The Real Problem With Judge Sotomayor

Having addressed the criticisms of Judge Sotomayor that I find unfair, we may now move on to discuss her rulings and commentary on gun rights and civil rights.

In Maloney v. Cuomo, Judge Sotomayor was part of a three judge panel which relied upon the holding in Presser v. Illinois to deny the petitioners request for incorporation of the Second Amendment against the states. In doing so, they noted that despite the landmark Second Amendment decision in District of Columbia v. Heller they still were bound by the ruling inPresser.

“We must follow Presser. Where, as here, a Supreme Court precedent ‘has direct application in a case, yet appears to rest on reasons rejected in some other line of decisions, the Court of Appeals should follow the case which directly controls, leaving to the Supreme Court the prerogative of overruling its own decisions.'”

This is sound if unimaginative legal reasoning. The question remains how she would handle Maloney at the Supreme Court level. It is scheduled to be heard starting no later than June 26th and many have suggested that a seated Justice Sotomayor would need to recuse herself.

A greater concern from Maloney is the finding of the court that the bearing of arms is not a fundamental right. However, it bears noting that the ‘arms’ in question were nunchakus. While we would all agree that they meet the constitutional definition of arms, as we saw in Heller the nature and commonality of the arms can change the courts reasoning.

This however follows her role in an earlier panel ruling in Sanchez-Villar v. United States in which the court referred to United States v. Toner in stating that “the right to possess a gun is clearly not a fundamental right.” This is starting to look a lot like a trend with Judge Sotomayor.

And the First Amendment is also not safe in the presence of Judge Sotomayor. In a case that brought cries of protest from all corners of the political spectrum, Judge Sotomayor ruled in Doninger v. Niehoff  that speech in a student’s personal blog could justify the school in denying her access to extra-curricular activities, effectively reducing or eliminating her chances at getting into the college of her choice.

The Problem is Fundamental

Having spent a large portion of this article defending Judge Sotomayor from the unwarranted attacks that have been leveled against her, I must now point out that I still find her to be an unacceptable candidate for Supreme Court Justice.

I should point out that I am not the only civil libertarian who shares this opinion. And I am not talking about conservatives either. Paul Levinson at Salon.com has published a scathing attack on her qualifications based upon her decision in Doninger.

In short, Judge Sotomayor appears to be the antithesis of an activist judge. She seems to go out of her way to defer to legislatures and precedents, even if it requires a tortured reading of the United States Constitution in order to do so.

Her problem appears to be that, to her, nothing is fundamental when government wants to restrict it.

In addition, his open carry advocacy has been featured on Nightline and The Daily Show With Jon Stewart.
View all posts by John Pierce →
This entry was posted in United States Supreme Court. Bookmark the permalink.