Guns fly out the door on Black Friday 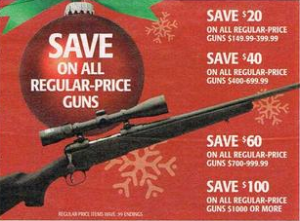 This Black Friday marked a personal first for me.  I actually stood in line, in the cold, just to be one of the first shoppers allowed into a store when it opened at Midnight.

So what was I after?  Was it the latest electronics?  Could it have been a video game system?  Perhaps even a sale on tennis shoes?  No, no, and no.  The only thing that could have convinced me to engage in what I had always characterized as silly behavior was of course … cheap guns!

And I was certainly not the only one.  My brother-in-law and I were the first two in line, arriving at the Dick’s Sporting Goods in Johnson City Tennessee around 8:00 PM on Thanksgiving.  But we had no sooner setup our camp chairs than others began to arrive.  The next to arrive was a deaf shooter who showed us on the sale flyer that he was there to get one of the “doorbuster” gun safe specials.  And then, as if some invisible floodgates had opened, we were quickly joined by dozens and then hundreds of others who, by the time the store opened at midnight, were lined up around the block.

And despite the rowdy and even dangerous crowds reported at other stores, the line at Dick’s was orderly, polite, and full of people who exemplified why gun owners are some of the best people in America.  I had several six packs of soda in my van which I retrieved and shared. Another man was there with his father who made several trips to McDonald’s to get coffee for those in line.  And we all took turns holding each others’ places during bathroom breaks.

But perhaps the most inspiring thing of all was when an employee emerged at 11:30 to hand out tickets for the “doorbuster” gun safes.  Even though quantities were limited, those in line made sure that the deaf man, who couldn’t hear the employee’s announcement, got his ticket first before they got their own.  You will not find that level of consideration anywhere else and I was proud of my fellow sportsmen and women.

And that’s another thing that I found so promising about the night.  There were more women in line than men. One woman told us she was getting a shotgun for her teenage son for turkey hunting.  Another woman was a competitive shooter.  It was great to see this visible representation of a phenomenon we have all been talking about for years.

When the doors opened, the crowd did rush inside, but not so fast as to trample anyone or knock over merchandise.  Within 30 seconds of the door being unlocked, the gun counter had a crowd of hundreds surrounding it. From what I could see, the best selling guns were the Remington 700, the Ruger 10/22, and the Mossberg Maverick shotgun.  Even more popular than the guns themselves were the gun safes and the 50% sale on all ammunition. By morning, the shelves were stripped bare across the entire section.

This was not a local phenomenon either. Similar reports are coming in from all across the country. Colorado reported doing over 4,000 background checks on Black Friday while the number in California was reportedly over 10,000. I suspect that when all the numbers are finally in, this Black Friday will break all previous records for gun sales.

As for me, I am just glad that what started out as a rather miserable cold night turned into a celebration of what is still great about America; guns, freedom, and consideration for your fellow citizen.

In addition, his open carry advocacy has been featured on Nightline and The Daily Show With Jon Stewart.
View all posts by John Pierce →
This entry was posted in Ammo Sales, Gun Sales. Bookmark the permalink.

3 Responses to Guns fly out the door on Black Friday