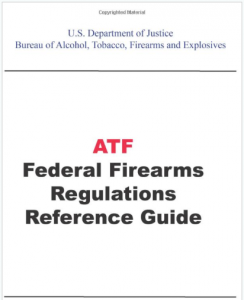 For those of you who are not familiar with the issue, the ATF is proposing to modify the regulations governing NFA applications for trusts, corporations, and other non-individual legal entities.

If you are not a NFA collector, you might be tempted to ask “Why should I care?”  The answer is that the proposed rulemaking will have disastrous consequences for collectors, the firearms industry, and ultimately the Second Amendment itself.

Current ATF regulations require an individual applicant to comply with a number of requirements that ‘legal-entity’ applicants are exempt from.  The most important of these is the requirement that applicants get approval from their local chief law-enforcement officer (CLEO) before an application may be submitted.  This is known colloquially as the ‘CLEO Sign-off.’

In many jurisdictions, the CLEO will not sign the form which acts as a complete and arbitrary ban on the acquisition.

That’s where the NFA trust (or other legal entity) comes into the picture.  Currently, legal-entity applicants do not need CLEO Sign-off.  This allows applicants in those jurisdictions where the CLEOs will not sign to avoid the de-facto ban that individual applicants face.

The proposed change wants to do away with this option.  It would require that all ‘responsible persons’ of a legal entity complete the same requirements that individual purchasers must currently complete including the process of securing a CLEO sign off which would subject legal-entity applicants to the same arbitrary bans that CLEOs have been using against individual applicants.

But it doesn’t end there.  The proposed change would also require that any new ‘responsible person’ of the legal entity submit a form  5320.23 along with fingerprints, photographs, and CLEO sign-off within 30 days of assuming their position with the legal entity.

What Can You Do To Help?

We need you to make your voice heard.  At the bottom of this article is a link that will take you to Regulations.gov where you may submit your own comment.  The following are suggested comments you might consider:

Rulemaking which imposes such a significant burden upon both citizens and industry should not be undertaken lightly.  Here, we have burdensome rulemaking which has the potential to damage or destroy segments of one of America’s few growing industries and it is not based upon an identified problem.  Rather, it is based upon mere conjecture.

ATF’s assertion in the proposed rulemaking that a disqualified person might form a trust or other legal entity in order to avoid undergoing a background check runs counter to current ATF directives.  Since 2009, ATF has required that the responsible party who picks up an NFA item from a dealer pursuant to an approved Form 4 and tax stamp complete a 4473 form and undergo an individual background check prior to taking possession of the NFA item.

NFA items are expensive, already heavily regulated, and virtually unheard of in criminal hands.  In fact, there have only been two crimes committed with NFA items during the last 79 years and both of those were crimes committed by law enforcement officers.  This despite the fact that there are over a quarter of a million legally owned pre-1986 machine guns in the ATF registry and untold tens of thousands of AOWs and suppressors.

The ATF stated in the proposed rulemaking that they had complied with the Regulatory Flexibility Act.  However, there is no indication in the proposed rulemaking that the needs of small businesses were considered. Instead, the ATF took a ‘one-size-fits-all’ approach to regulating which will have a devastating impact upon the many small businesses that supply the NFA market.

The proposed rulemaking intrudes unnecessarily upon the sovereignty of states by interfering with the lawful uses of trust instruments for legitimate estate planning purposes.  In addition, the proposed rulemaking demonstrates a complete lack of understanding of the many ways that a trust might be used to pass assets on to one’s heirs.  By defining the term ‘responsible person’ so broadly as to include beneficiaries, one finds oneself having to contemplate the absurd possibility of fingerprinting, photographing, and securing CLEO sign-offs for unborn children.

ATF’s assertion that CLEOs who had been unwilling to sign off on applications in the past would do so in the future based upon changes in the wording of the certification has been proven to be false.  When contacted, numerous CLEOs who have refused to sign in the past have stated that nothing in the new verbiage would change their mind about signing certifications in the future.  The proposed rulemaking would result in thousands of law-abiding collectors being banned from going through the very process that the ATF NFA Branch is charged with overseeing.

By requiring that any new ‘responsible person’ submit a 5320.23 as well as a CLEO sign-off within 30 days of their appointment, the proposed rulemaking radically intrudes upon the traditional uses of trusts and upon the rights of settlors to manage their estate plans.

ATF has failed to consider less intrusive forms of regulation that might accomplish the same goals.  By eliminating the CLEO sign-off and narrowing the definition of ‘responsible person’, ATF could still require fingerprints and background checks on the person primarily responsible for a legal entity application without exposing law-abiding citizens to the arbitrary and capricious CLEO sign-off ban.

Passage of this proposed rule would do nothing to enhance safety but would only place additional bureaucratic roadblocks in front of law-abiding collectors and swamp ATF staff who are already overwhelmed.  The result would be a drastic increase in the processing time for NFA applications and potentially a collapse of the booming suppressor industry.

These are merely suggestions.  You are welcome to pick one or more of the above comments or write your own but now that you know just how significant the issue is we are facing, I urge you to head on over to the Regulations.gov page for the proposed rulemaking and make your voice heard!

In addition, his open carry advocacy has been featured on Nightline and The Daily Show With Jon Stewart.
View all posts by John Pierce →
This entry was posted in Abuse of Discretion, Abuse of Power, Administrative Regulations, BATFE, Class III, Due Process, NFA, Regulatory Rulemaking. Bookmark the permalink.