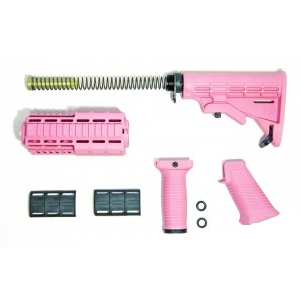 Features that make firearms 'evil' according to Cook County

The Illinois Supreme Court has just now released its opinion in Wilson v. County of Cook and it contains ‘slightly’ good news for Second Amendment advocates.

If you recall, Wilson was filed by Illinois residents and gun owners Matthew D. Wilson, Troy Edhlund, and Joseph Messineo as a challenge to the 2006 ordinance Cook County passed in response to the September, 2004 expiration of President Clinton’s so-called ‘Assault Weapons Ban.’

The Wilson plaintiffs challenged the bill seeking injunctive and declaratory relief based upon vagueness, equal protection and Second Amendment claims.

This challenge having been filed prior to the Supreme Court decision in McDonald v. Chicago, the circuit court dismissed, noting that, at that time, the Second Amendment was not incorporated against the state and therefore did not restrain the police power thereof.  The appellate court upheld the circuit court decision.

Following the decision in McDonald, the Illinois Supreme Court issued a supervisory order sending Wilson back to the appellate court, directing it to vacate its previous judgment and review the case on its merits.  The appellate court once again upheld the dismissal of the case holding that the Second Amendment did not extend to ‘assault weapons.’

Many Second Amendment advocates noted at the time that this ran counter to the District of Columbia v. Heller court’s reaffirmation of the premise from United States v. Miller that the Second Amendment protects “the sorts of weapons … ‘in common use at the time'” and many of the firearms thus banned by the Cook County Ordinance are the best selling firearms in America today, including the wildly popular AR & AK semiautomatic sporting rifles.

Following the ruling of the appellate court, the Illinois Supreme Court granted certiorari.  The oral arguments were held earlier this year.

In the just issued opinion, the court quickly dismissed both the due process vagueness and equal protection arguments, remanding the case back to the trial court based solely upon the Second Amendment claim.  In doing so, the court offered limited hope to the plaintiffs, noting that they did so in order to give the County “an opportunity to present evidence to justify the nexus between the Ordinance and the governmental interest it seeks to protect.”  They seemed to imply that should the County live up to this burden, that the court could reasonably find that such a ban was constitutional.

The judicial battle to define the full scope of the Second Amendment will undoubtedly continue for decades and will involve many more trips to the United States Supreme Court.  But I have little hope that the Illinois court system will stand on the side of citizen’s right in any meaningful way except to provide cases of abuse on which the High Court may rule.

In addition, his open carry advocacy has been featured on Nightline and The Daily Show With Jon Stewart.
View all posts by John Pierce →
This entry was posted in 'Assault Weapons', Chicago, Gun Control, Illinois, Incorporation, Second Amendment Case Law. Bookmark the permalink.