‘From my cold dead hands’ and gun-owner apathy 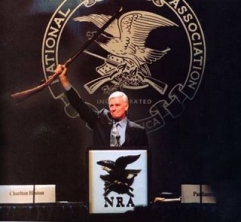 “If you will not fight for the right when you can easily win without bloodshed, if you will not fight when your victory can be sure and not too costly, you may come to a moment when you have to fight with all the odds against you, and only a precarious chance to survive. There may even be a worse case – You may have to fight when there is no hope of victory, and it will be better to perish than to live in slavery.” – Winston Churchill

Last week, Gun Rights Examiner David Codrea published a column entitled “Preaching to gun owners is not the same as preaching to the choir” in which he touched on one of the greatest threats facing gun owners today … ourselves!

His mention of gun owner apathy is a perfect lead-in to this weeks “Myths of the Gun” column.  The myth we will be debunking today is the belief that merely paying a yearly membership fee to the NRA guarantees the protection of our gun rights.

Now let me hasten to add that this is not meant to be an attack on the NRA.  I am an NRA life member as well as an NRA certified instructor and they are a powerful force for good and deserve our support.  However, they cannot win the day alone.  Active involvement by gun owners in the public policy debate is required every single day!

A perfect example of the problem we face was a conversation I had at a local gun club several years ago.  After shooting at the pistol range, I wandered up to the clubhouse.  A bunch of the members had just finished shooting skeet and the clubhouse was packed.  I was talking to a small group about the benefits of being active in state level organizations when one of the other members became quite agitated about the political discussion in the clubhouse.  The conversation went something like this:

“We need to support these state level groups more.  If we don’t continue to fight for our rights in an organized fashion, the government will continue to nibble away at them until we no longer even have the right to own guns.”

“All these gun rights groups are just out to get our money.  Anyway, the government will NEVER take away our guns.  They are just too many of us.

“Look at what they have already done in places like Chicago, New York, New Jersey, California and DC. Don’t think it can’t happen here if people don’t get involved in the legislative process.  Wouldn’t it be better to join in the legislative fight now instead of letting it get to that point?”

“Well, come the day they show up to take MY guns, they can have them bullets first. But until then, stop bothering me.”

At this point, a number of other members joined the conversation, and I allowed the intensity to die down.  But, afterward, as I was thinking about what was said, it became clear to me that this conversation was a microcosm of a serious issue facing the gun rights movement.

Simply said, the problem is that there is a great deal of political apathy among American gun owners.  Many of these politically apathetic gun owners diligently pay their NRA dues every year and expect that this will defeat all attacks on our freedoms at the federal and state level without any further involvement on their part.  When asked to support a state level organization, write a letter to the editor or to simply sign a petition, they become irritated and belligerent.

When these gun owners are pressed about their true dedication to the cause of gun rights, they invariably offer the infamous “… from my cold dead fingers” or “They can have them … bullets first“.  To these people, I would like to say, “Please stop with the clichés!  If your freedom means so little to you that you are not willing to fight for it politically, then do not insult my intelligence by claiming to be willing to lay down your life for it. ”

I am not trying to sound harsh, but I feel that this has to be said.  Activism works!  On the other hand, complaining and whining about a law that you were too lazy to fight politically does not.  It only reinforces the negative stereotypes about gun owners.

In closing, I should say that I do understand the sentiment behind the clichés.  I too will fight to the end to preserve our 2nd Amendment rights, but I will not wait until the battle has been lost to take the field.

In addition, his open carry advocacy has been featured on Nightline and The Daily Show With Jon Stewart.
View all posts by John Pierce →
This entry was posted in Myths & Misconceptions, NRA. Bookmark the permalink.