Out of the mouths of babes

This is an article I wrote for the VCDL Defender Newsletter back in 2003. 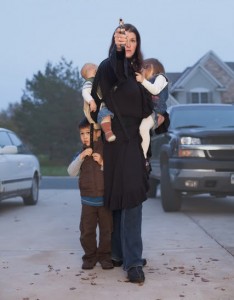 “I do not love the bright sword for its sharpness, nor the arrow for its swiftness, nor the warrior for his glory. I love only that which they defend.” – J.R.R.Tolkien

On Monday, June 9th, in San Jose California, a 9-year-old girl was kidnapped and sexually assaulted.  During the kidnapping, her mother and brother were severely beaten in an unsuccessful effort to protect her.  Thankfully, she was eventually released and is now back with her family.

Even though CNN has been running the story non-stop for the last few days, by the time this is printed, the incident will, at best, be only a dim memory to most of you.  However, you can rest assured that those affected by this horror will never forget it.

I bring this up because it was this incident that was the catalyst for this article.  My wife and I had been watching CNN’s coverage without considering the young eyes and ears that were in the same room when suddenly we realized that our daughter was listening intently.  At 7, my daughter doesn’t really understand what sexual assault means, but she does know what kidnapping means and she could tell that something really bad had happened to the little girl by my wife’s reaction.

When they showed the mother with a massively bruised and swollen face describing her attempt to stop the kidnapping, my daughter turned to me and asked “Daddy … why didn’t she just use her gun to stop the bad man?”  Coming from a child who has, literally, never seen her parents without guns on, this is a perfectly understandable question.

She knows, of course, that not all the people she meets openly carry firearms, but I guess she had just assumed that they still had them close at hand.  When I told her that some parents didn’t carry guns at all and that the mother had tried with all her strength to stop the attacker but couldn’t, she became absolutely terrified.

She had never considered the idea that a child could be with their parents and still be helpless.  She was suddenly faced with the horrible thought that, even in her own home and surrounded by those she trusts to protect her, she might not be safe.  It truly broke my heart to see her standing there with doubt and fear on her face and her small arms wrapped around herself protectively as a little bit of the innocence of childhood was stripped away.

The rest of that day, she questioned me and my wife over-and-over again about whether or not such a thing could ever happen to her.  We explained to her that protecting her and our son was one of the most important reasons that we chose to carry self-defense firearms and that we would strive to always be able to defend and protect them.

Thankfully, in the way of children everywhere, her fears were largely forgotten by the next day.  But I found myself thinking about what she had asked.  What if the mother in this case had been armed?  While a firearm is no absolute guarantee of safety, it would have given a tremendous advantage to a mother whose courage and willingness to fight for her children cannot be questioned.  I cannot help but believe that if she had been properly armed, she would have prevailed instead of being forced to watch bleeding and helpless as her child was dragged away by a predator.

The more that I thought about this, the angrier I became.  I cannot speak for this mother specifically, but I do know that there are literally thousands of families that have chosen not to have self-defense firearms in their homes because of the lies and deceptions of the gun control movement.  This incident should serve as a grim reminder that you can count on no one but yourself to defend your family.

The oft-repeated motto of the police is “To Protect and Serve”, but this is misleading.  I have immense respect for law enforcement and have no doubt that, if they could, they would stand between us and any danger.  But, they cannot.  They are not omniscient.  They do not know where or when the predators will attack.  They can only find and hopefully punish them after the fact.

Now, I don’t know about you, but I personally refuse to face one of my children who has been forced to endure such an ordeal and offer them this hollow consolation.  “It’s ok honey.  The police have caught the bad man.  Now, we just have to go to court and see him again and then tell exactly what he did to you in great detail while the defense attorney twists your words and mocks your tears.”

The anti-self-defense crowd are right about one thing though.  Children’s lives are special and it is a parent’s responsibility to protect their children.  Children depend upon their parents to be their guardians and protectors in an uncertain and often harsh world.  After all, is this not the very essence of what it means to be a parent?

Sadly, those who oppose us have forgotten one simple fact.  Those who are defenseless themselves can never hope to be the protector of their children.

In addition, his open carry advocacy has been featured on Nightline and The Daily Show With Jon Stewart.
View all posts by John Pierce →
This entry was posted in Self Defense. Bookmark the permalink.

1 Response to Out of the mouths of babes