Plaintiffs have filed their response brief in Woollard v. Sheridan 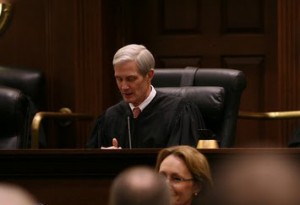 As you may recall, Woollard v. Sheridan is the Maryland case in which US District Court Judge Benson Everett Legg struck down Maryland’s discretionary may-issue handgun permitting scheme.

In that ruling, he held that “the right to bear arms is not limited to the home” and declared Maryland’s requirement that applicants articulate a “good and substantial reason” unconstitutional both in general and as-applied to Mr. Woollard.

As reported in this column, Judge Legg subsequently granted a temporary stay of his order pending a consideration of arguments for and against the issuance of a permanent stay.  The temporary stay laid out a timeline in which three briefs will be filed before he makes his final decision.  The first was an April 19th deadline for the state.

In this reporter’s opinion, the state’s arguments in their first brief were scattered, unsupported by facts, and in some cases outright misleading.  They claimed that they were only concerned about applicants who do have a “good and substantial reason”, that permit holders are dangerous, that shall-issue permits increase crime, that such a system would be difficult and expensive to maintain, and most astonishingly, that people should instead open carry rifles or shotguns for self-defense.

The deadline for the plaintiff’s response was yesterday and, as expected, attorneys Alan Gura and Cary Hansel absolutely shredded each of the state’s points.

Plaintiff’s attorneys quickly latched onto the concession in footnote 1 of the state’s brief wherein the state concedes that the court has no discretion to grant a stay as-applied to the plaintiff.  They note that this case involves “the widespread denial of a fundamental constitutional right” and that since the state has “never claimed that Woollard is differently-situated than anyone else, or that they erred in applying the [“good and substantial reason”] requirement against him … [i]f the Court lacks discretion to stay the injunction in Woollard’s favor, it lacks discretion to stay the injunction in the public’s favor.”

As for Maryland’s claim that administering a shall-issue permitting system would impose significant costs and burdens upon the state, plaintiffs’ attorneys noted that “the costs of obeying the constitution are irrelevant” especially where what is at stake is “the continued deprivation of a fundamental right.”  They also noted that Maryland is part of an extremely small minority of states which do not administer their permit systems as shall-issue and that none of the existing shall-issue states appear to have the administrative problems which Maryland is predicting.

They also provided the following data comparing crime statistics per 100,000 residents in may-issue and no-issue states as a bloc vs the national average.

They put the finishing touches on this argument by citing to McDonald v. Chicago wherein the court stated that analyzing Second Amendment cases does not “require judges to assess the costs and benefits of firearms restrictions and thus to make difficult empirical judgments in an area in which they lack expertise.”  In short, the battle of competing studies which Maryland introduced in their first brief are not of the nature that is useful or appropriate in making such a decision.

They end their brief by quoting from the 2012 case of Bateman v. Perdue.  As a Second Amendment advocate, I find this quote both heart-warming and indicative of a sea-change in how the courts are treating Second Amendment cases.

There is much more in the opinion and I would encourage everyone to read it all when you have the time.  We are one more step closer to what is looking more and more like a decision to lift the stay and bring Maryland kicking and screaming back into the fraternity of states which give the proper legislative and judicial weight to the Second Amendment.

UPDATE:  The state has filed their final brief

7 Responses to Plaintiffs have filed their response brief in Woollard v. Sheridan