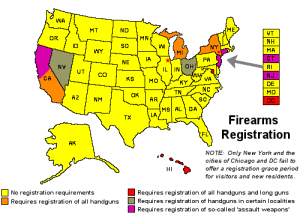 I have just released our latest map over at OpenCarry.org. It categorizes all 50 states based upon the kinds of firearms registration laws (if any) that the state has implemented.

This is a resource that we should have developed long ago because registration is one of the great myths and misconceptions about firearms in America. I have been teaching firearm safety and carry permit classes for almost a decade now and this is a topic that I have to cover in every single class. And it never ceases to amaze me how gun owners who are otherwise incredibly well informed about the laws regarding firearms will blithely tell me that their guns are “registered.”

At the heart of this misunderstanding lies the background check required for all purchases from a federally licensed firearms dealer. Faced with the bureaucratic detail of the BATFE 4473 form, many gun owners mistakenly think that the firearm is being “registered” at the same time that the background check is being conducted.

But nothing could be further from the truth. In fact, the same law that mandates the background check also prohibits the data being used for registration purposes and requires that all data thus collected be destroyed other than the identifying number and the date the number was assigned.

This explains why gun owners are confused about registration, but what about non-gun owners? The fault here lies almost exclusively with the media (TV shows, movies and news reports). From CSI to NCIS to daytime soap operas, registration is presented as a given, even in those states where registration is specifically banned by state law.

And why is this? Some will be quick to say that the main-stream media is anti-gun and takes every opportunity to present an anti-gun viewpoint. Others will accuse the writers of entertainment shows of simple laziness in the face of research they feel to be immaterial in a fictional show. And while both of these are probably true to a certain extent, I believe there is a simpler explanation.

Much of the writing, production and filming of TV shows and movies occurs in California, New York, Las Vegas & Chicago. If you look at our map, you will see that these are some of the rare areas where there actually is some form of registration required. In speaking today with members of the media who live in California or New York, they invariably expressed disbelief and amazement that their states are such far outliers where gun laws are concerned.

This myopic tunnel-vision invariably bleeds over into both entertainment scripts as well as new reports. As a result, the public is ill-served and lead to believe in an illusion.

The few states and cities that do have registration requirements are small, isolated islands in the sea of gun freedom that is America. To my friends and colleagues marooned on these islands I can only say, “Come on in … the water’s fine!”

In addition, his open carry advocacy has been featured on Nightline and The Daily Show With Jon Stewart.
View all posts by John Pierce →
This entry was posted in Myths & Misconceptions, Registration. Bookmark the permalink.

4 Responses to The great registration myth