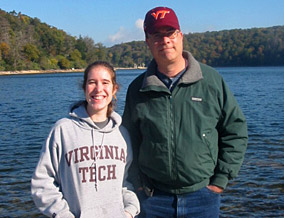 Five years ago today, on a cold, sad Monday in April, Virginia Tech senior Seung Hui Cho went on a rampage that cost the lives of 32 of the Commonwealth’s best and brightest young people and sent a nation into mourning.

Almost from the moment the attack was first reported, people started asking the question “What could have been done to prevent this tragedy?”   While administrators at Virginia Tech continue to insist that there was nothing they could have done, I can point to a defining moment where Virginia Tech failed these students.

It was January 31st, 2006 and Virginia Tech spokesman and Vice President Larry Hincker was expressing the University’s extreme happiness with the failure of a bill that would have allowed Virginia college students with concealed carry permits to possess their defensive firearms while on campus. HB 1572, introduced by Delegate Gilbert, had failed to report out of the Militia and Police Subcommittee and upon hearing this, Mr. Hincker made the following statement; “I’m sure the university community is appreciative of the General Assembly’s actions because this will help parents, students, faculty and visitors feel safe on our campus.”

But we all know that “feeling safe” and “being safe” are two very different things and we also know that criminals and the mentally disturbed do not obey laws.  But the good guys do … oh yes.  And that is why Cho was able to extinguish so many bright flames that day.  There was no one equipped to oppose him.  Not one.

Now, on the fifth anniversary of this terrible tragedy, one courageous parent is speaking out.  Holly Adams lost her daughter Leslie Sherman that day and it is in remembrance of her daughter that Holly put out the following statement:

On April 16, 2007, my child, Leslie Sherman, was killed by Seung-Hui Cho during the Virginia Tech massacre. Today is the fifth anniversary of her death. Always in my memories, every day I wish that this tragedy was a nightmare and I could wake up to hold my daughter even if it is just one more time. That opportunity might have been possible if someone been able to defend and protect my daughter in her classroom before Cho took 30 precious lives.

There is an unfortunate drive for more gun control and the continuation of preventing guns on campus by parents whose children lived or survived during that fatal day. Several family members of those victims have actively voiced their support for increased gun control measures. As result, it has been assumed that they speak for all families of the Virginia Tech victims. I am writing this to make it clear that this is not the case. They do not represent me and my views.

Speaking for myself, I would give anything if someone on campus; a professor, one of the trained military or guardsman taking classes or another student could have saved my daughter by shooting Cho before he killed our loved ones. Because professors, staff and students are precluded from protecting themselves on campus, Cho, a student at Virginia Tech himself, was able to simply walk on campus and go on a killing rampage with no worry that anyone would stop him.

I ask a simple question: Would the other parents of victims be forever thankful if a professor or student was allowed to carry a firearm and could have stopped Seung-Hui Cho before their loved one was injured or killed? I would be. I also suspect that the tragedy may not have occurred at all if Cho knew that either faculty members or students were permitted to carry their own weapons on campus. Cho took his own life before campus police were able to reach him and put a stop to his killing spree.

A sad testament to this anniversary date is the number of similar killings in schools and public places that have taken place afterwards as if nothing has changed to help prevent such needless and heartbreaking events. That is why I fully support the VCDL in their outstanding efforts to help prevent this type of tragedy and loss from occurring in the future.

As a parent myself, I am having a hard time seeing the screen because of the tears these words bring to my eyes.  But despite the terrible loss in her own life, Holly is thinking of the safety of other students … in future classrooms … who might one day face a madman themselves.  She wants them to have the protector that Virginia Tech denied to Leslie.

Our thoughts and prayers should go out to Holly Adams on this day of sad remembrance.  We should also offer her our heartfelt gratitude for her support of VCDL’s efforts to restore the self-defense rights of teachers, administrators, adult-students, and visitors on the many beautiful campuses of Virginia’s colleges and universities.

In addition, his open carry advocacy has been featured on Nightline and The Daily Show With Jon Stewart.
View all posts by John Pierce →
This entry was posted in Abuse of Discretion, Administrative Regulations, Campus Carry, Virginia. Bookmark the permalink.