Virginia Tech Responds to AG Opinion on ‘No Guns’ Policy 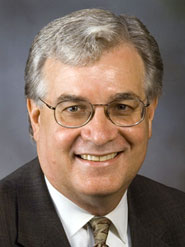 Following last week’s opinion by Attorney General Ken Cuccinelli that state university policies are trumped by state-issued concealed handgun permits while properly promulgated regulations are not, Virginia Tech has announced their intent to transform their ‘no guns’ policy into a regulation.

Virginia Tech Associate Vice President of University Relations Larry Hincker, who in 2006 spearheaded the university’s efforts to defeat a bill which would have allowed students and employees to carry handguns on campus, told local media that he expects the Board of Visitors to initiate the process when next they meet with University officials.

In 2006, after the campus carry bill was defeated, Hincker was quoted as saying that “This will help parents, students, faculty and visitors feel safe on our campus.”  As for the possibility of those on campus needing legally carried firearms for self defense in the face of an armed attacker?  Hincker assured the campus community that “Virginia Tech has a very sound policy preventing same.”  But less than a year later, in one of the most tragic incidents in University history, Seung-Hui Cho demonstrated that no policy, regulation or law can stop a criminal or disturbed individual intent on harming others.

However, Virginia Tech has continued to cling to the same flawed policy which left employees, teachers, and adult students disarmed, helpless and locked in a building with a madman. And Hincker says that he expects the wording of the policy to remain the same in any proposed regulation.

The university’s employees, students, and volunteers, or  any visitor or other third party attending a sporting, entertainment, or educational event, or visiting an academic or administrative office building, dining facility, or residence hall, are further prohibited from carrying, maintaining, or storing a firearm or weapon on any university facility, even if the owner has a valid permit, when it is not required by the individual’s job, or in accordance with the relevant University Policies for Student Life.  This prohibition applies to all events on campus where people congregate in any public or outdoor areas.

Any such individual who is reported or discovered to possess a firearm or weapon on university property will be asked to remove it immediately.  Failure to comply may  result in a student conduct referral and/or arrest, or an employee disciplinary action and/or arrest.

Hincker went on to add that it was a simple matter of changing policy into regulation. Generally, this would be an incorrect statement as the process to promulgate a regulation under the Virginia Administrative Process Act (VAPA) requires a number of time consuming steps as the following chart from the Joint Legislative Audit and Review Commission demonstrates: 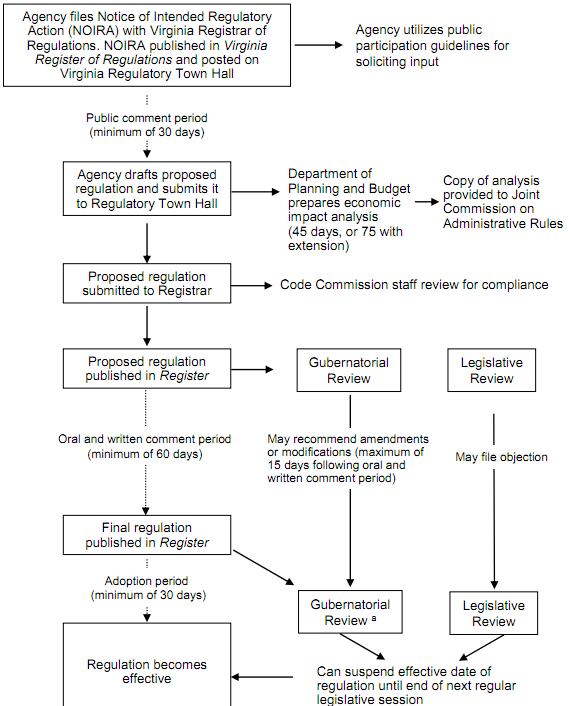 However, the Virginia General Assembly has exempted the actions of Educational institutions operated by the Commonwealth from almost all of the requirement of the Virginia Administrative Process Act.

6. Educational institutions operated by the Commonwealth, provided that, with respect to § 2.2-4031, such educational institutions shall be exempt from the publication requirements only with respect to regulations that pertain to (i) their academic affairs, (ii) the selection, tenure, promotion and disciplining of faculty and employees, (iii) the selection of students, and (iv) rules of conduct and disciplining of students.

Consequently, Virginia Tech is statutorily empowered to negate the clear will of the legislature and enact a regulation having the force and effect of law without any of the due process protections embodied in the Virginia Administrative Process Act.  The University is only required to publish the regulation pursuant to § 2.2-4031 but is not required to accept any public comment unless their own internal policy requires it.

The general assembly granted this blanket exemption to state-run educational institutions in order to facilitate their ability to respond to issues involving the operation of the institutions, not to allow them to thwart the legislative intent of the legislature.

Next session, it is imperative that Virginia voters support the Virginia Citizens Defense League in expanding preemption to apply to state agency action to prevent these types of abuses of agency power.

In addition, his open carry advocacy has been featured on Nightline and The Daily Show With Jon Stewart.
View all posts by John Pierce →
This entry was posted in Campus Carry, Virginia. Bookmark the permalink.